A Return To The City Lights!

Sigrun Loe Sparboe was in Oslo last Friday 7th November to remind the local residents of the collection of songs making up her debut solo record ‘Uten at du vet det’.

Expectations were understandably high after a stunning live show to a packed auditorium earlier this year at Josefine Vertshus, also situated in Oslo.

Having made the excursion back north to her hometown of Harstad after several years of living and breathing in the capital city, the move has not seen Sigrun Loe Sparboe lose any of her previous momentum as far as recording and playing live are concerned. Such details were in evidence this evening performing to an equally busy Oslo crowd where a few new compositions entered the set, that was otherwise made up of material from ‘Uten at du vet det’.

The two stalwarts comprising of Mattias Krohn Nielsen (guitar) and Sverre Tollefsen Laupstad (piano) were also in attendance this evening, as it’s their rear-guard action that helps fuel the songs dynamics from ‘Uten at du vet det’.

Once the lush tones of the title track opens up, we find ourselves on familiar ground with its moments of quieter contemplation only to rise once more and end on an inspirational high. The paean to the north – ‘Nord’ – is introduced and delivered proudly by Sparboe, which is understandable considering her move back home and the continual success this has brought musically. 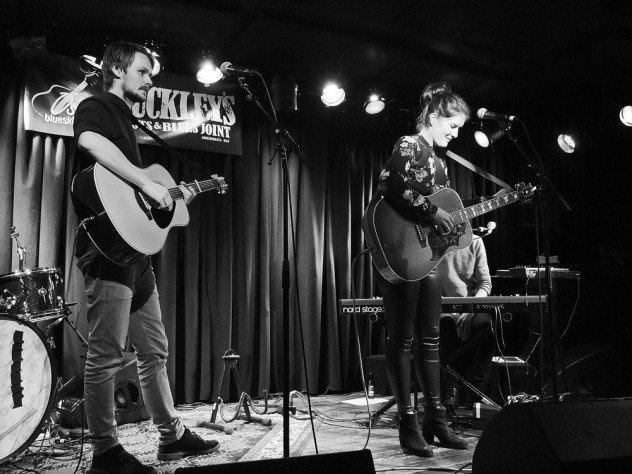 By the time ‘Globus med lys’ arrives FLW is performing backstrokes across a lake under the stars and feeling nothing but warm affection inside due to the spellbinding qualities of this truly beautiful song. The dreamy ambience soon evaporates once the darker undercurrent of ‘Ved rokken’ introduces itself. There seems to be an added tension to this composition this evening, with both Nielsen and Sparboe picking intensely away at their guitars as if genuinely sensing an impending threat looming on the horizon. ‘Bitter’ lifts the mood as it has that ability to pick itself up and brush itself off with its uplifting melody and combined vocals.

Having experienced a range of emotions this evening, the crushed desires of ‘Brevet’ sends the deepest message of regret as its expectations linger painfully with Sparboe projecting the faintest of vocals that pulls at the heartstrings with, “Og æ venta, og æ venta” leaving one to feel like the Tin Man by the song’s conclusion.

Judging by the crowd’s ecstatic response once the final few notes had been heard, FLW was left thinking that hopefully it will not be too long until Sigrun Loe Sparboe decides to journey south once more, only next time with a plan to hold a two-night residency because when music is a special as this, a second outing is definitely required.