Flavour of the moment is Canadian six-piece band Shooting Guns who are in the midst of promoting their single, and title track, from their third and current album ‘Flavour Country’.

With the band having built a solid reputation as the ones to go to for film soundtrack work, hence their inclusion on the horror – comedy feature WolfCop that was a huge Netflix hit, the new material from Shooting Guns continues their instrumental work with some of their fastest, heaviest and most visceral material to date. 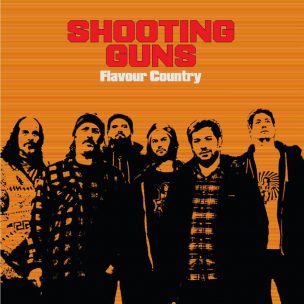 The current long player ‘Flavour Country’ is also the first album recorded by the band themselves at their own Pre-Rock Studios in Saskatoon, SK, which is situated in the middle of the Canadian prairies, with the title of the album being largely influenced by this location. In addition, the new album was mastered by John McBain (ex-Monster Magnet, Carlton Melton), who also mastered the band’s previous RidingEasy releases.

Having clocked up many miles touring throughout Canada during the past seven years, Shooting Guns will look to take the new album globally with hopes of an international tour; something of which the band are yet to achieve.

The album ‘Flavour Country’ is out now on RidingEasy Records.