Do you have five favourite artists when it comes to the wilder side of rockabilly and rock ‘n’ roll?

“It’s hard for me to answer as those records are still fresh in my mind and I don’t want to plug some albums that I’ve just compiled, but they are my favourite artists. I actually listen to a lot more black wild rock ‘n’ roll than white. For example, Esquerita, and more as a body of work because not all of his tracks are great but as a body [of work] it’s breathtaking. In terms of rockabilly, then something by Don and Dewey, Little Richard and maybe Ronnie Self. If we’re going for the wild things, then probably Link Wray, as some of those Link Wray vocal tracks seem to me too unbelievable to exist. For example, the first time I heard ‘Hidden Charms’ or something like that, was as exciting as the last time I heard it. He only had one lung but he sings that brilliantly and the guitar playing is so savage.”

What are your thoughts regarding the current rockabilly revival?

“The artists I like tend not to be particularly of today and certainly aren’t English, but my favourites are Big Sandy and His Fly-Rite Boys, and they have been around for twenty years I guess. Big Sandy is just incredible and I last saw him in LA when I was over there. He was performing out on the street in a market and it was exactly as you’d imagine with Hank Williams or someone in the 50s, and he’s such a great talent. So that was a really beautiful thing to see.”

Is it right that you like a lot of rap music?

“I was massively into rap music in the 90s as I think that was a really golden period. Every now and again I will listen to a lot of rap, but not so much modern stuff. As soon as it got to Fifty Cent and The Game and they got to be really big, it just seemed really awful to me as I thought these aren’t really good rappers, so I didn’t really understand all the fuss. Rap music for a while was really far-reaching and exciting. The fact that people like NWA or De La Soul, for example, were the mainstream of rap for a while that’s an extraordinary thing to happen because they’re really out there as artists. So rap music seems quite conservative to me now, I kind of know what’s coming, and I’m not an expert on the current scene, but there was a period where it became very stale overnight, due to its personality becoming completely subsumed by the business rather than the music.”

Are there any other genres of music you’re into that people, especially the media, do not associate you with?

“People are always going to associate me with rock ‘n’ roll due to the hairstyle I had when I was first on TV. People will always associate me with rock ‘n’ roll, and that doesn’t bother me because I don’t listen to music for anyone else’s approval. I don’t know really, as it’s not a chain of thought I can be bothered to entertain whether they’re surprised or not as I don’t do it for them. I don’t listen to music for someone else to think I’m cool or nice or smart or whatever. With God’s Jukebox, I played everything from pre-war blues to Wu Tan Klan on a show-by-show basis, so I don’t think anyone would be particularly surprised.” 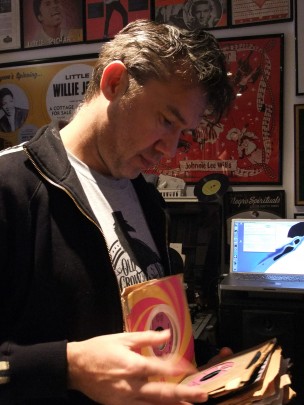 Where did all begin for you in terms of radio work?

“My first show radio show was around ’92 on Radio Five and I was the cool young thing on television and it was inevitable that I would get a show,” replies Mark tongue firmly planted in cheek. “At that point, the show was mainly indie and rap and a very current show that I think was called Fabulous or something. It was an ok show, and I wasn’t very good at all, in fact I was pretty poor! The next show I did was on GLR, which was a really good show and I did that for a couple of years on a Sunday morning. At the time, I was mostly listening to sixties beat music and sixties soul and ska. It was brilliant working at GLR as it was great to be able to play that sort of music because they didn’t care what you played. They [GLR] had no money and no audience and there was never any fuss in terms of the station being focused in a certain way. Even when I sat in for the afternoon shows, I would start with a ten minute James Brown record and there are certain guidelines in radio where you must play a short track and say hello. However, I would sometimes play two in a row of really long records and it felt like being in the forties when there were no rules about radio because no one really listened and nobody really cared, but every week we’d get people asking what certain tracks were, and it kind of felt like the radio environment that everyone dreams of. I was completely convinced that it was all fine, and eventually I’d end up on Radio One or something with an afternoon show playing Junior Parker and Jackie Wilson because I had created this little thing where the people who liked that sort of stuff would tune in. Therefore, it was really confusing going elsewhere and realising you can’t just do [whatever you want] as you have to slot into a certain thing. I did quite a lot on Radio One during those years, which would have been mainly indie and garage as I was really into 60s garage at that point. In fact, my first Radio One show was a pretty good show called Out On Blue Six and I played a whole hour of really extreme 60s garage with all the back from the grave stuff. Again, it felt extraordinary to be on national radio, even though it was late at night, to play an hour of really intoxicating music without any fits. It seemed bizarre but also acceptable.” 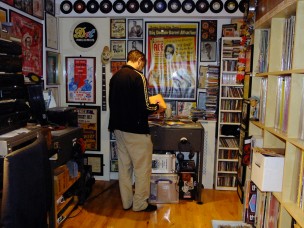 What are the best record stores you’ve visited in America and the UK?

“I’d go to the states for one or two months at a time. I would literally drive from town to town and stop in a record store and buy what I could. Then I’d drive to another town and I would do that for months at a time. Last year, I went to Florida and found two record stores in the whole state that for me were worth visiting. I travelled the whole state from top to bottom, every town, east to west but the record stores have just gone and those trips are over for me, unfortunately. It’s a strange thing because I spent a good twenty years doing it and it’s a nice way to see America. There are some in LA that I like, with one called Vinyl Surplus which I really love as it’s the greatest store and it’s really massive and always really cheap with records in really good condition. In the UK, I like one called Rollin’ Records in West Wickham, which is a really great store, and another one Sounds That Are Swinging in Camden, which is just a rock ‘n’ roll store and one of the few that has ever been just that. Also, I really love the Record and Tape exchanges as well, just for the scale because I have a very broad taste and you’ll always find something.”

People will always associate me with rock 'n' roll, and that doesn't bother me because I don't listen to music for anyone else's approval."