A Different Breed Of Indie 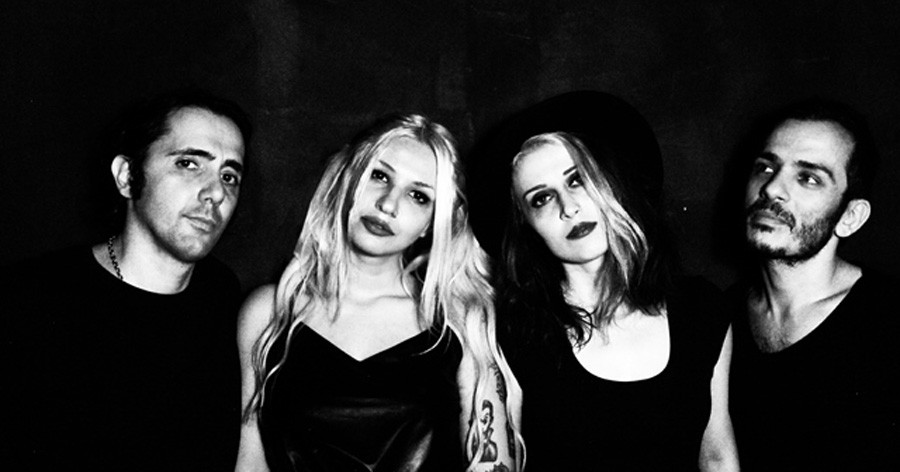 These reptilians are not for taming! A different breed of indie is an appropriate description for Reptilians From Andromeda.

It’s not every day that Famous Last Words (FLW) gets the chance to speak with an indie band situated in Istanbul, Turkey, but that’s exactly what transpired during one particular afternoon.

Once the option to interview Reptilians From Andromeda materialised, FLW was quick on the draw to request more than five minutes of their time after recently hearing the band’s current EP ‘Sonic Rabbit Hole’. Such was the immediate impact of the entire contents of the EP’s songs with, in particular, the compelling ‘Psychic Girl’ with its detached vocals, rolling and almost doom-laden drumbeats and understated guitars, to far more prickly sounding numbers such as ‘We Are Who We Are’ and ‘Like To The River To the Sea’ that the amalgamation of post-punk, garage and industrial rhythms forcing their way from the adjacent speakers was all too persuasive and therefore left no other option than to dial the hotline straight to the centre of Reptilians From Andromeda HQ in order to get the lowdown on this band. 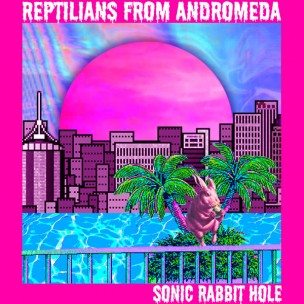 With very little known about Reptilians From Andromeda here at FLW, as well as this being a first in terms of securing a chat with a truly independent act all the way from Istanbul (Reptilians From Andromeda believe in a DIY ethic when it comes to making their music), FLW was curious to learn of whether an underground music scene exists in a country such as Turkey, considering the high level of coverage UK and American markets receive in relation to alternative music.

“There was a great underground music movement in the 90s” begins guitarist and bassist Tolga Özbey before adding, “but now there are lots of good bands, and it’s hard to talk about a scene anymore. The internet thing killed collective minds. Now everyone is isolated and alone. They’re pumpin’ more competitive life standards. I think everywhere is like that [in] Europe and USA. [Having said that] Istanbul is a great, chaotic and beautiful city. Istanbul is both east and west together at the same time. I got so many memories here. But we are not doing mainstream music, its underground. It appeals to those with pleasure at the edge.”

What becomes apparent after a few minutes in the company of Reptilians From Andromeda is that they sound rather content with life right now, and every reason to after applying the finishing touches to an extremely strong and captivating body of work with ‘Sonic Rabbit Hole’ earlier this year. In fact, Tolga goes so far as to comment: “I’m not longing about anything. I did what I wanted [to], and I’m still doing [it] like that. I am so happy with my marriage and my musical life.”

While the charismatic Aybike Çelik Özbey (vocals) is in agreement with her fellow bandmate, it is her country of origin that provides a form of tension which she remarks, “I agree with Tolga, but I don’t feel safe in Turkey. I think that it could be safer.” Perhaps therefore, it is this very unease that Aybike speaks of that provides that extra edge to the band’s sound and lyrics, the latter of which she is responsible for, because there is a genuine feeling of dread surging through the centre of ‘We Are Who We Are” to cite one example from ‘Sonic Rabbit Hole’. 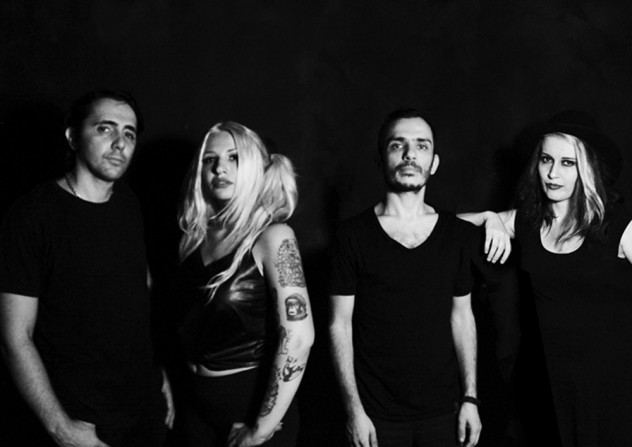 “‘We Are Who We Are'” is about the past and people in the past who still try to chase us,” explains Aybike in response to FLWs’ thoughts regarding this song. “We can bury our past, but the past makes you who you are. The more they conceal something, the more it will fight to come out. You should not lie about who you were.”

Considering you’re the chief lyricist Aybike, where do you get your inspiration from when drumming up words for new Reptilians From Andromeda songs?

“Actually, I do not expect to get inspired,” she begins. “I’m going to the feet of the inspiration, and this situation is making me. I take inspiration from everything. I make myself free to write, and I don’t care what people think [or] what people say. It’s an expression. But overall, I can be more creative before I fall asleep. Sometimes I use themes from my dreams.”

Once the lyrics had been scribbled down in preparation for the actual EP, such inspiration was transferred to the recording studio when Reptilians From Andromeda really got to grips with the entire contents of ‘Sonic Rabbit Hole’.

“We recorded all the stuff at our home studio with some vintage equipment; basically analogue and lo-fi stuff,” Tolga explains. “We are so fast about production, so we don’t believe in polished hi-fi shit. [Therefore] ‘Sonic Rabbit Hole’ is an EP which we improvised at the beginning, and only a small amount of re-arrangement was required from us. We didn’t want to lose its soul.”

Do you believe that the new EP incorporates any new ideas, musically, in terms of what Reptilians From Andromeda has recorded before?

“We always try to do new things in our recordings,” replies Tolga. “We don’t have a direct way to record, as our recording process changes with our mood. For example, sometimes we record a guitar riff and make it loop and play other instruments on it. On other occasions, we have used guitar feedback, noises and radio sounds to build some atonal melodies under the real sound. Also, we sometimes slow down the recording and then record vocals.”

What is the title of your current EP referring to exactly? 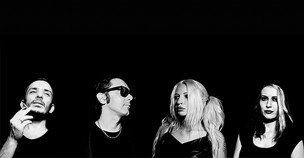 “We are trying to be melodic and noisy in both instances,” Tolga answers after some initial thought. “For me, ‘Sonic Rabbit Hole’ is referring to a gate between mainstream and the underground. We are trying to play with perception and sensation of the audience.”

Reptilians From Andromeda’s music has been given numerous descriptions by a variety of different sources, but more often than not the term post-punk is the one that appears most frequently.

“At the beginning, we described ourselves as a ‘Lo-fi garage’ band, but critics mostly used the description post-punk when talking about us. Our friend, Kemal Aydemir (RIP), once called us ‘Nowave’ after he passed away, so we began to use Nowave. He knew us really well, so it’s the best description anyway.”

With the ‘Sonic Rabbit Hole’ EP attracting much attention from the press and similarly the general public, Reptilians From Andromeda is beginning to find a broadening market for their combined efforts of melodic and caustic post-punk and DIY alternative rock. So where next for this fascinating band whose ‘legendary’, in FLWs’ opinion, ‘Psychic Girl’, from the aforementioned EP, forces another reminder of just how wonderful this record is by nagging away at the senses once more, and therefore forcing a repeat play on the generic office player?

“Our new 7″ EP ‘Doomsday’ will be released by PROF SNY Records (Czech Republic) in February 2017,” comments Tolga regarding the next 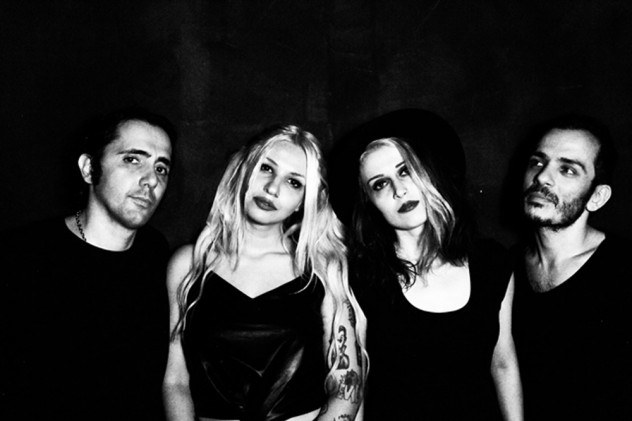 steps for Reptilians From Andromeda. “There will be four songs on the EP, which are produced by us, and recording is mastered by Fran Ashcroft from legendary UK power-pop band MONOS!”

“We are now shooting a video for one of the songs ‘Come On Babe’ from this EP,” Aybike adds to the conversation. “And there are lots of upcoming shows mainly in Istanbul.”

Do you have any final words of the day before getting back to the task at hand of finishing the work for your next record?

“Thanks for this great interview. Keep in touch with Reptilians!”

Famous Last Words (FLW) would be foolish not to after the positive impression ‘Sonic Rabbit Hole’ has made by leaving nothing but a feeling of great admiration for this Turkish band who go by the name Reptilians From Andromeda.

But we are not doing mainstream music, its underground. It appeals to those with pleasure at the edge."

Where did this all begin for Reptilians From Andromeda, and how did the band get together?

“By 2013, me and Aybike recorded some instrumental tracks together and at the beginning it was called Solar Chaos,” Tolga begins explaining regarding the initial foundations of Reptilians From Andromeda.

“We also made some collage videos for these songs and released an EP as Solar Chaos by F*** Yr Body Up Records from Canada,” says Aybike.

“We were always travelling on to a city [and then] to another during that time. Aybike wrote some great lyrics, so we recorded a 4-track demo with a reel-to-reel audio tape recorder and a drum machine. People around us liked the sound and we just uploaded these songs on Soundcloud, and gave a new name to this project as Reptilians From Andromeda,” Tolga continues.

“We got a good response from the US and UK [record] labels who were interested in garage and post-punk sounds. We have released 4 EPs and an LP from several labels. ‘Sonic Rabbit Hole’ on Small Bear Records (UK) got amazing attention from critics, so we decided to take the project on stage to have fun!” Aybike finishes.