A new three-piece band who goes by the name Three Star Riot has emerged in a northern part of Finland. The process of touting their musical wares has already begun with the debut double-sided digital single ‘Sorry’ and ‘Where Have You Gone?’. The brand-new songs reveal links to classic 90’s punk-rock sounds and, more acutely, acts such as The Living End considering Three Star Riot’s use of upright bass joining up the dots to make additional connections with musical reference points as punkabilly. 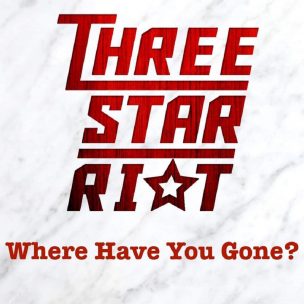 It all makes for a heady brew that is equally exhilarating as it is engaging with its fast rhythms and catchy pop hooks all of which caught the attention of Famous Last Words (FLW) only recently. In addition to the two tracks however, further examination of Three Star Riot was required after the band’s press bio’ revealed links to their past, and connections with this very music publication having spilt the beans on previous act (although, still on hiatus apparently, more of which later), and rather excellent in our humble opinion, TimeKillers. Therefore, with such knowledge in mind, Three Star Riot’s working relationship with punk-rock is even more apparent given TimeKillers association with the same genre, the only difference being a harder-edge to the majority of the latter outfit’s tunes.

So, with Three Star Riot’s star in the ascendency given the positive reception to the band’s debut single and breaking news of two more singles during the coming months, it was time to get the lowdown on this rather intriguing new act.

How did Three Star Riot get together, and when did this all begin for the band?

“Three Star Riot was first formed at the very end of 2018 by Tuomas Julku (vocals/guitar) and Jere Peurasaari (double bass/vocals), both of whom happened to be drunk as a skunk in a basement in Maksniemi, which is a village area in Simo, Finland. Oscar Suovaniemi (drums/attempted vocals) joined in the beginning of 2019. Since Tuomas joined TimeKillers in 2013, and Jere introduced him to The Living End, it has been a joint dream to form a three-piece-punkabilly band.” 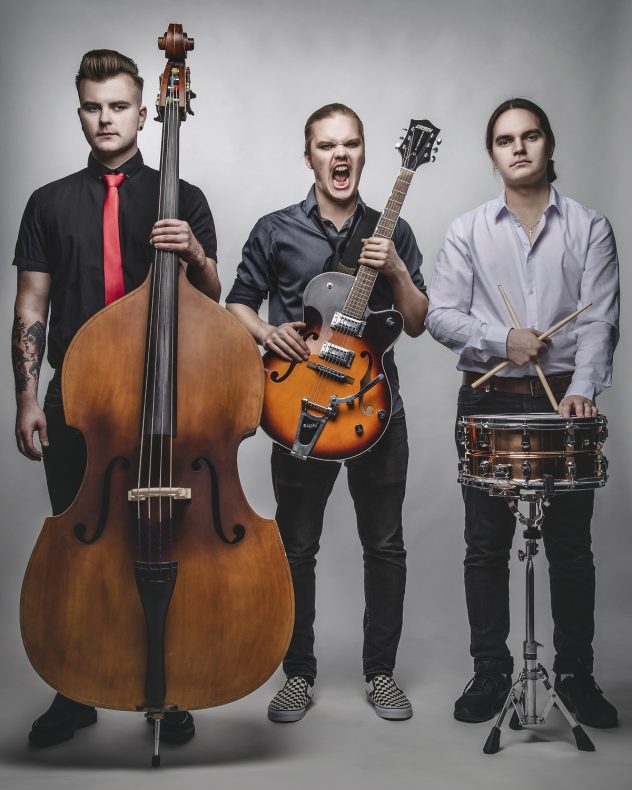 How would Three Star Riot describe your sound?

“Simply put, it’s probably a mix between The Living End and Green Day. At this moment, and how the songs are formed, the “billy” part is mostly in the double bass, while the guitar parts are quite straight up punk. Well, it probably fits well for a punkabilly band.”

Who do you consider as influences in terms of your music?

“The Living End is hands down our biggest influence. The band was formed due to love for their music. In addition to The Living End, there are loads of rockabilly/punkabilly/psychobilly/rock bands that we draw inspiration from. Even with a “specific” genre title, we believe that there is no point trying to fit in one specific box. As long as our sound is what we consider punkabilly, then we are happy.”

Did you plan to start out as a trio, or was this something that naturally happened?

“Yes. The inspiration we got from The Living End meant that Three Star Riot was always going to be a three-piece band. And it always will be.”

Speaking of bands, and referring to a point Three Star Riot made earlier, what happened to the line-up TimeKillers, given Tuomas and Jere’s associations with this outfit?

“Life. Nothing dramatic. Officially, TimeKillers still hasn’t quit. At this point it just felt that the band had reached its natural conclusion. Everyone has their own projects and Jere and Tuomas ended up forming Three Star Riot.”

What can you tell FLW about Three Star Riot’s first singles ‘Sorry’ and ‘Where have You Gone’?

“The first songs were recorded at Epätoivola, Kemi, which is a joint band house between local musicians in mid-November 2020.”

How long did the whole recording process take? Also, did you encounter any difficulties along the way or was it all relatively easy?

“The recording process was quite straightforward. It was one weekend from Friday to Sunday and we were done. We had an excellent producer with Teemu Ylinikka (Slap Betty), which made things smooth and fun. Even if we consumed our own weight in alcohol (you might remember our adventures with sugar wine when recording TimeKillers’ ‘Dead City Dreams’), we experienced no problems. And, most importantly, we had fun! (Sidenote: We have switched from sugar wine to long drinks. So that’s progress!). The songs were mixed and mastered by Henri Arvola (Harvola Music). The sound he made was nowhere near what we probably had in mind, but his somewhat modern/metal approach made a brilliant touch to the songs that we had never even thought about.”

Who writes the lyrics when it comes to Three Star Riot?

“At this moment Tuomas writes all the lyrics. It is a mutual agreement that everyone can, and is encouraged to, join in with the writing, but Tuomas needs to have the last word on what is recorded. As the singer, it is important that he can stand behind every word that he sings. So, because of that it has been quite natural that he writes the lyrics.”

Are these songs from personal experiences or about other people’s lives?

“The songs are a blend between personal and other people’s experiences and fiction. The original inspiration usually comes from personal events, and then the story is written to best fit the theme/story that the songs are trying to tell.” 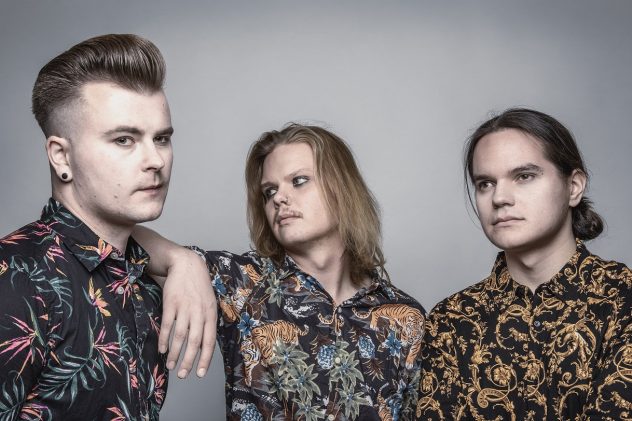 The songs are catchy and melodic, especially ‘Sorry’, and FLW really likes that. So, are these qualities important to you as a band when writing and recording, or can we expect something a bit different when it comes to future songs?

“In my opinion, good melodies are important,” responds Tuomas. “I grew up listening to The Beatles, The Rolling Stones and other 60’s/70’s stuff, so my ear kinda screams for that. I also write songs with the melody first. I get an idea for a melody and start building up from there. I guess that the melody-based style comes from that too. For the next set of singles we are releasing, there will be a song that is a bit more in-your-face due to its story. We try to go song first. So, if in the future there is a story that needs to be told straight up screaming, then that’s what we’re gonna do.”

Three Star Riot has two new singles scheduled for March/April this year. What can you tell us about these songs?

“One of the songs of the March/April releases is somewhat political in nature. For example, criticising the black-and-white and holier than thou mentality that people seem to have nowadays (This seems to be an argument in several countries right now, FLW). The other one follows more on the same line as ‘Sorry’ and ‘Where Have You Gone?’. The songs will only be available digitally. This is what we think is best considering the modern environment in music. The music is self-released and distributed via Distrokid. We are planning to do an album release later in 2021, which will be available digitally and on vinyl.”

What have you experienced as a band in terms of the ongoing restrictions because of the coronavirus pandemic? For example, has it been a difficult time in terms of writing, recording, and performing live?

“We played our first show in February 2020, so basically just before the pandemic hit Finland. After that we have been able to play two shows when the restrictions in Finland were a bit looser. We miss playing to a live crowd, of course, but we’ve spent our time well. 2019 kinda went down the drain for us due to work, studies, and other projects. So, in spring of 2020 we decided to really get this band going. We rehearsed a lot, wrote songs, etc. To be honest, we think we’ve kinda benefitted from the ongoing situation. Starting a new band, trying to get your music heard and especially getting opportunities to play live is always difficult, but now we have had the opportunity to focus on gaining an audience online. Hopefully, we can transform our delightful numbers of Spotify streams into live audiences when the times allow.”

Are there three items that Three Star Riot can never be without?

What are your hopes for Three Star Riot? 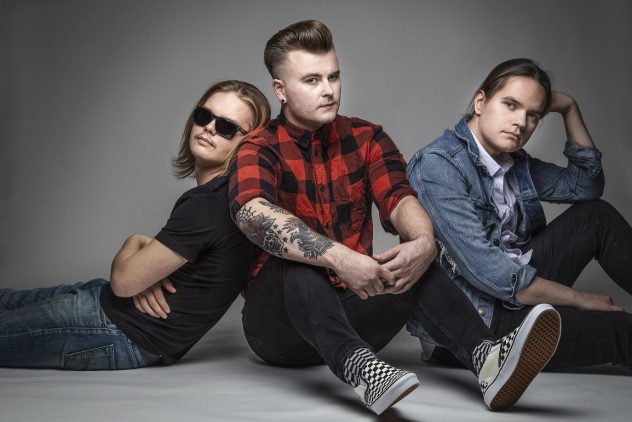 “During this time when we mostly “live” online, we hope to build a solid audience and fanbase. We have loads of ideas for the future that will help us involve the listeners with the band. After that it is hopefully shows, shows, and more shows. And of course, studio [time] for the album is already scheduled. We like to set small, achievable milestones for ourselves. At this moment, our “final goal” is to open for The Living End someday. Then we’ll know we’ve done something right. What happens after that, who knows?”

What are your future plans for Three Star Riot?

“Hopefully, we can tackle this pandemic all well and safe and as soon as possible. And, as stated before, then it is time to hit the road and start working on the album.”

“A while ago Tuomas and Jere heard some people talking about what it means to be an adult. Their advice for life was: “At some point of your life, you need to start acknowledging your responsibilities as an adult. But for God’s sake, never start acting like an adult!” Those are some good words to live by.”

The double-sided single ‘Sorry’ and ‘Where Have You Gone?’ are available digitally on Spotify.

We like to set small, achievable milestones for ourselves. At this moment, our “final goal” is to open for The Living End someday. Then we’ll know we’ve done something right.”

Do you have any amusing or rather strange stories to tell about any incidents that has happened to the band since you have been together?

“Ah, there are so many! I think it tells a story that the band’s name comes from a Finnish alcoholic drink that has three stars on the bottle. Our philosophy is to bring back the kinda childish/brattish attitude to rock. So basically, to have as much of a good time as we can while making good music. To summarise Three Star Riot, you can think of Huey, Dewey and Louie; triplets that, while individually might be quite tame and easy to handle, are an absolute nightmare when put together!”

The Mystery Remains A Desire Regained
Back To Top