A Wall Of Sound

A Clean Kitchen Is A Happy Kitchen offer a complex soundscape with A History of Music: A Mosaic

To some people the creative outpourings of A Clean Kitchen Is A Happy Kitchen are the likely sounds that provided the inspiration to the thoughts stockpiling in the mind of John Doe when plotting his masterpiece to the seven deadly sins and the eventual downfall of Homicide Detective David Mills (‘Seven’). Other people will regard The History of Music: A Mosaic – the band’s current album – as a creative masterstroke purely on musical terms whereby a number of inspirations and influences collide and start to knit together to form a series of intricate songs that are expansive in their visions – containing elements of post-rock, free-form jazz and psychedelic experimentation – but remaining somewhat abstruse when trying to determine their overall meanings.

While there may not be a clear path to navigate through the mass of instrumentation and abstract ideas, the second long player from A Clean Kitchen Is A Happy Kitchen is embraced with welcoming arms because of its rarefied nature in such sterile times of conformity, especially when it comes to what constitutes as rock ‘n’ roll these days. This may be the sound of commercial suicide, but it is one that is honest and successful for being allowed free reign when it comes to artistic expression. 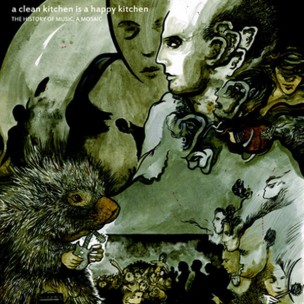 If you want accessibility, then you have come to the wrong place as the nearest offering to such a description regarding A History of Music: A Mosaic is the stone-cold drum pattern and buzzing guitar of ‘Floyd Is Warped’, otherwise the band’s latest album is a pretty dense jungle of sounds that requires patience but one that will be duly rewarded once the aforementioned intricate details begin to reveal themselves.

This complex set of arrangements displaying itself as A History of Music: A Mosaic was put together by way of Belgium and Scottish threesome Craig Ward (guitar/vocals), Bootsie Butsenzeller (drums/vocals) and Paul Lamont (bass/vocals). The Kitchen was no doubt a busy hive of activity and one that is difficult to comprehend when trying to fathom out its inner workings when attempting to piece together the songs making up the band’s second album. It seemed most natural, therefore, to begin at this very juncture when considering the creative workings of A Clean Kitchen Is A Happy Kitchen, who just happened to be in the midst of a current tour promoting A History of Music: A Mosaic, by asking the band whether the album relied on much improvisation considering its expansive sound?

“The basic instrumental parts are indeed improvisations, which we edited later in my home studio,” replies the band’s rear-guard Boots [Butsenzeller].  “Afterwards we overdubbed the spherical parts – extra guitars and electronics, vocals, saxophone and even body percussion. The improvisations on this session were better and tighter than those on the first album, for the simple reason that we got to know each other better, both musically and emotionally after a few years of existence.”

Was it a lengthy process recording the album considering the scope of A History of Music: A Mosaic?

“The basic recording of drums, bass and guitar was completed in a single day. Editing, overdubbing and mixing took approximately a year,” answers Boots once more on the recording of A History of Music: A Mosaic.

The recording of A History of Music: A Mosaic saw A Clean Kitchen Is A Happy Kitchen decamp to Antwerp in Belgium with the Trix Music Centre chosen as the preferred choice of recording studio. Another reason for this choice of destination is that Antwerp just happens to be the hometown of Bootsie Butsenzeller. Therefore, considering the distance in miles between the band members, how exactly does the recording process work if you are living in different locations?

“The basic recordings we now do as a trio, with editing and overdubbing done mostly by Craig and myself,” Boots explains. “The mixing we do via the internet – I send my mixes to Craig and await comments and suggestions.”

How did A Clean Kitchen Is A Happy Kitchen get started as a band, considering that one of you is living in Antwerp?

“Craig and I first met in Antwerp at a concert by one of my previous bands,” comments Boots. “He came to me with the words: ‘You touched me straight in my rock heart’. It wasn’t until a considerable period later that we found ourselves in my home studio recording the first album. For the live shows, we needed a bass player and that’s where Paul came in.”

Is it true that one of you is running a guest house as well?

“Yes, I do. It pays the bills,” replies Craig Ward. 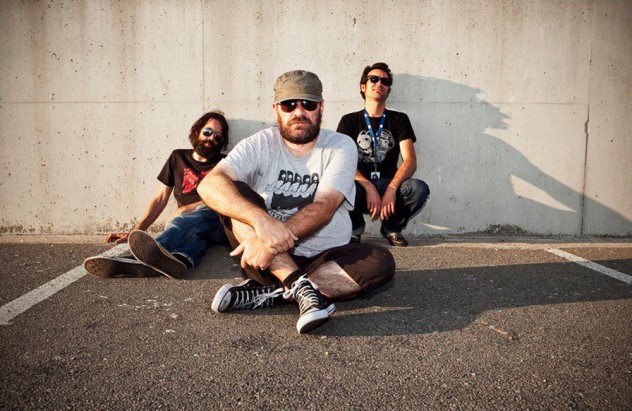 With the “burdens and joys of everyday life” providing the inspiration for the collage of sounds making up A History of Music: A Mosaic and the musical influences sourced from an eclectic bunch including the likes of Captain Beefheart, John Coltrane, King Crimson, Shellac, Pink Floyd, Bartok, Stravinsky, Fripp and, perhaps, not so strange choice – Les Dawson, if it’s the same one FLW has in mind, then the ideas behind A Clean Kitchen Is A Happy Kitchen become a little clearer, especially when A Clean Kitchen Is A Happy Kitchen provide another layer of explanation concerning their sound  by describing it as, “Skronk for the ladies and Sauerkraut rock” for the rest of us fellows. Bearing this in mind, were the trio literally trying to live up to such a title as A History of Music: A Mosaic by trying to incorporate as many different sounds and influences as possible?

“Not at all,” is the immediate and honest reply from Boots. “The title came afterwards and needn’t be taken seriously.”

Who is responsible for the lyrics or is it an evenly spread contribution from all band members?

“A Clean Kitchen Is A Happy Kitchen is the most democratic band on the planet,” says Boots. “We all contribute in terms of lyrics and singing duties. So whoever chooses to add vocals to a particular piece takes on writing duties as well. That’s one reason why some of the songs remain instrumental. Vocals are not the most important part of our music as we’re not a pop band. So we see vocals as just another instrument. For my lyrics, I’m inspired by both what irritates me and what suits me in daily life.”

Looking back on The History of Music: A Mosaic is the band happy with the overall outcome or is there anything you would have done differently now?

“We’re quite happy. I guess we managed to develop our sound in positive way. The debut album was raw and even more spontaneous. This time we purified the sound a bit, without any synth-anxiety for instance,” comments Boots.

With the dense layers of A History of Music: A Mosaic, one or two songs are causing a few sleepless nights in terms of their overall meanings. Therefore, with two songs in particular – ‘Innocence Fading’ and ‘Floyd Is Warped’, proving to be two such examples, can you provide some details regarding what these songs are about please?

“‘Innocence Fading’ is about one of the things that I find most saddening; the childish innocence that gets lost in the process of growing up, only to become a boring, greedy, self-righteous, arrogant adult asshole,” replies Boots sounding really frustrated. “The lyrics for ‘Floyd Is Warped’ are Paul’s – they’re just bits and pieces copied from a scrapbook of texts he usually uses for another project he’s in. He just flipped from page to page when he came in to sing the track. We named it ‘Floyd Is Warped’ because we were talking about Pink Floyd at the time. We talk about Floyd occasionally, you see.” 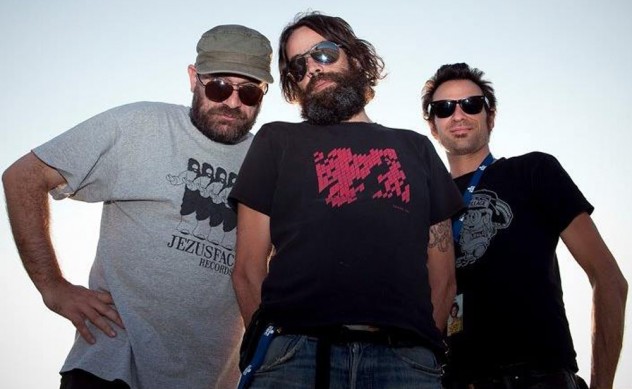 “If you rig the lyrics up,” steps in Paul before continuing, “you can sort of get the message that no matter how highbrow or big people will make you think they are, everyone still needs to check if there’s toilet paper left if they want to leave the bog without smelly fingers!”

After such words of wisdom, no doubt A Clean Kitchen Is A Happy Kitchen’s rider is fully stocked of such essential amenities when touring, especially considering the importance of performing live as it’s the bread and butter for this three-piece band as Boots explains: “At this time, playing gigs is the best reward for the blood, sweat and tears we put into the album.”

In terms of where the band venture creatively after this stint of live dates is anyone’s guess – apart from guitarist and vocalist Craig Ward who will be open for business as usual with his more routine profession managing his guest house – but one thing is for certain that A Clean Kitchen Is A Happy Kitchen will continue to pursue their own creative agenda and long may that reign.

Further information regarding A Clean Kitchen Is A Happy Kitchen can be found at:

A Clean Kitchen Is A Happy Kitchen is the most democratic band on the planet..."

A Clean Kitchen Is A Happy Kitchen show their considerate side when thinking of others and a gift of a song. Touring incidents, however, is a completely different prospect altogether.

“‘Bedbugs’ turned out to be our lullaby because Craig fell asleep in the studio while we were recording it, and not for the first time. So we added his loopy stuff later and dedicated the song to our kids in order to provide them with sweet dreams. Touring incidents, however, would take a whole issue of ‘famous last words’.”