All Aboard The Rob Ryan Roadshow

Taking their rockin rhythms to the people, The Rob Ryan Roadshow is one band worth experiencing as there is more to them than simply Goin’ Old School.

Quite literally playing up to their moniker, The Rob Ryan Roadshow encapsulates more than one influence when it to comes to writing and recording, before taking these songs for a test drive on the live circuit where the ‘show’ truly begins.

By incorporating a number of sources taken from blues, country, honky tonk, rockabilly, rock ‘n’ roll and a minuscule side order of rhythm and blues, the four band members involved in this roadshow seemingly bring their own individual preferences to the table, before transforming the whole melting pot of ideas into something golden. 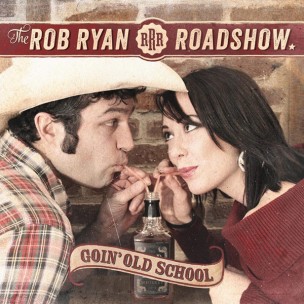 Proof of this chemistry between the four comrades of The Rob Ryan Roadshow was 2015’s rather excellent, ‘Goin’ Old School’, which managed to weld the previously mentioned range of influences together, and come out the other side with an album that was equally consistent in terms of its song writing, but one that also worked as a complete whole.

However, as with all roadshows, it wouldn’t be complete without the odd surprise here and there to keep those individuals entertained who are looking for that little extra something when it comes to any band’s live set, because this is exactly what this four-piece band managed to produce with the surprise inclusion of 80’s pop giants Eurythmics’ ‘Missionary Man’ on their recent album.

A courageous decision most definitely when nestling next to a cover of Ronnie Dawson’s ‘Monkey Beat’, for example, not to mention The Rob Ryan Roadshow’s own rockin’ material, considering the generations apart in terms of the genres in question here, but it was a decision that worked (surprisingly) well and largely down to a considerable amount of grit being applied to the Roadshow’s version.

But it is this very daring that marks out The Rob Ryan Roadshow as something a bit more special when looking at their contemporaries, because they are willing to break with tradition to a certain extent, and experiment with numerous ideas in order to add variety to their song writing, but also in a genuine attempt to reach wider audiences where their broader sound will likely appeal to those in love with country and rockabilly, just much as they are in love with punk and rock music for example. 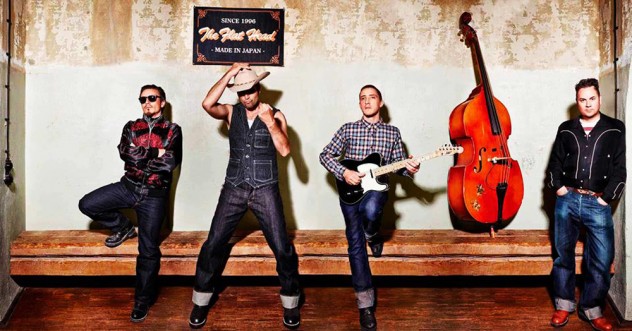 Another likely reason for this willingness to experiment and give songs a slightly different edge, can be identified from Rob Ryan himself, who made the decision to pack his own musical baggage and head to Europe from America, which showed a great measure of courage in terms of the move itself, but also for the reason that there was no way of knowing whether his creative ideas and ambitions would come to fruition once making this transition.

With Germany being the chosen destination, the move from the States to an altogether different culture has proved a successful one, as Rob Ryan found friendship and a creative common ground with the musicians involved who brought to life ‘Goin’ Old School’, and therefore going someway to meeting any pre-held aspirations when residing Stateside.

So with this being album number four for The Rob Ryan Roadshow, and therefore clearly displaying no signs of letting up (thankfully), it was duty bound for Famous Last Words (FLW) in terms finding out the facts regarding this roadshow of musicians, and the reasons for their decisions when bringing together a variety of genres and use of audacious tactics when covering an 80s pop song. It was left to Rob Ryan and Ralf Sommer, from The Rob Ryan Roadshow, to come up with the answers.

Where did this all begin for The Rob Ryan Roadshow, and how did the band get together?

“It all began in Berlin in 2008 when I moved here,” begins Rob Ryan. “I went to Berlin Guitars and met Leonard Lott. He then introduced me to our then guitar player, Tex Morton, and then to Ralf Sommer. We started the band and it’s been going ever since.”

“In 2008, my friend Tex Morton (Mad Sin, Sunny Domestosz, Chipp Hanna, etc.) called me and said that he would be playing at a talent contest here in Berlin together with an American who’d just arrived in town,” adds Ralf Sommer to the opening conversation. “I went there and the first thing I spotted above the packed place on stage was a tall guy in a brown suit sporting a white Stetson. I listened to a few songs and liked it right way. Even though it was just the two of them, they won that night. When I went home, I was sure that I wanted to set up a band with this guy. So rehearsals were arranged, and we played our first open air show at the “Berlin lacht” festival in July 2008, and we also got a record deal with Rhythm Bomb right away, which led to the release of the first album ‘The Highway Man’ (2008).From there on things started to evolve pretty fast.” 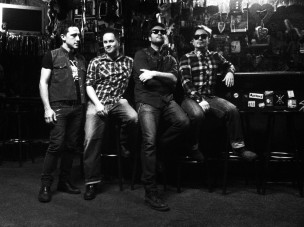 There seems to be a few different influences in terms of the album, ‘Goin’ Old School’, from country, rockabilly and even a little bit of rhythm & blues would you agree?

“I have an affinity for all of those styles,” answers Rob. “Rhythm and blues will always be a part of me, and I wanted to incorporate that into the current style a bit.”

“I’m coming from a rockabilly and rock ‘n’ roll background,” Ralf explains. “Boris [Bisfer] (drums) played and still plays in surf bands, and Jaco (guitar) has more of a blues and rock background. Therefore, I sometimes think that what we play isn’t really new, but the way we do it is.”

How would you describe The Rob Ryan Roadshow sound?

“Up-tempo, danceable, drinkable and always ready to party,” says Rob. “Whoever is the crowd, there’s something for everyone, and a must see live band sound.”

“We used to call it high energy honky tonk, but now I’d rather call it roots music explosion because there’s so much more to it,” continues Ralf. “Influences in terms of the songs range from soul to rockabilly, and from Americana to rock ‘n’ roll.”

Can you provide a few background details regarding your album ‘Goin’ Old School’? 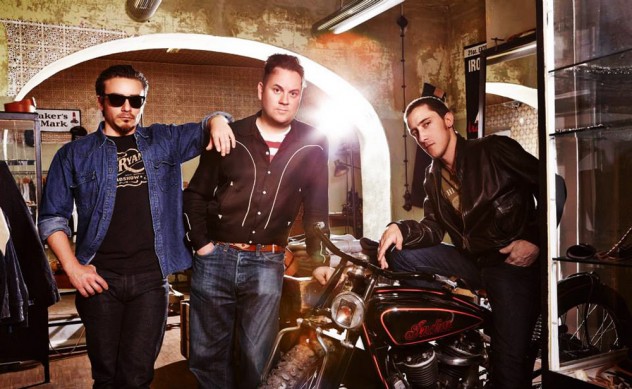 “The record was recorded at Lightning Studios in Berlin ,” Rob explains. “On and off it took three or four days, which stretched out over a year. The problems are always with us musicians, such as scheduling and punctuality. However, it was a pretty smooth here.”

“It was all recorded live,” Ralf adds before continuing, “with only a few overdubs at the end. You just can’t beat this energy and atmosphere. You’re there together, and you’ll play it together. If there’s a f*** up in a take, you’ve all gotta do it together again until it sounds right. Working at Lightning Recorders is always a pleasure.”

Do you have a favourite song from the album ‘Goin’ Old School’?

“I’d say, ‘Stay In Bed,” says Rob first. “Wherever we play, and to whomever, it always goes over.”

FLW couldn’t agree more as ‘Stay In Bed’ is definitely one of the highlights of the album.

“‘Stay In Bed’ is about staying inside with your lover and showing that to each other, like seven or eight times in one day,” reveals Rob regarding this particular song. “[Whereas] ‘Not good Enough’ is about someone that is just never satisfied with you,” in response to our questioning regarding any tracks that reflect a different mood.

As the discussion focuses on the rest of the contents of ‘Goin’ Old School’, and what Ronnie Dawson would have made of the band’s version of ‘Monkey Beat’ with Rob replying in good humour, “You would have to ask him. Unfortunately, the internet connection hasn’t stretched up to heaven yet”, the inevitable Eurythmics question finally pops up.

“I’ve always liked Eurythmics, Annie Lennox and the songs,” answers Rob. “So I said [to the band] let’s do ‘Missionary Man’, which is another song that really goes over live.”

“That’s what I meant, the sound stretches out,” says Ralf. “People are surprised we give it our own touch, and they love it.”

On a lighter note, if you could have one thing right now, what would it be?

“A Hot Rod Model A Ford. I would just love to have one,” is the response from Ralf.

What sorts of people do you get attending your live shows? For example, is it a mixture of rockabillies and country fans or just one of these groups of supporters?

“We already play to a mix of people from punks to rockabillies to general music supporters who just dig the music,” Ralf replies. “A few weeks ago, we went to record a song at our friend’s Alex Ott Paul Lincke Studio here in Berlin. He’s got a pretty modern sound, and he’s also mixed us live a few times. Anyway, with him we recorded a new song as a demo that points to a more commercial direction in order to contact a few people in the industry (No worries, it still rocks, ha-ha!).”

What’s next for The Rob Ryan Roadshow?

“Live at Montreux” will be released, then another studio album to follow,” answers Rob. “Gigs are ever ongoing, with festivals this year and some great club gigs all over Europe.” 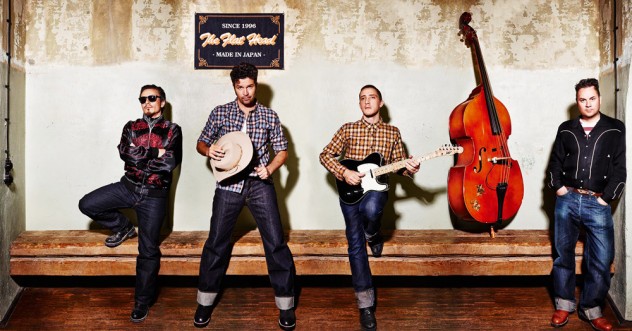 “Last year, we almost played one hundred shows and festivals all over Europe,” says Ralf. “It looks like it will be more this year as the band becomes more popular, with a lot more people coming to the shows. Another video will be released soon with the song ‘Long Gone Day’ from the last album, and then we’ll start working on a new video for a new song called, ‘Good Rockin, Cold Beer, Hot Chicks’, but that’s another story.”

Any final words of the day from The Rob Ryan Roadshow?

“Last words…[we’d] love to see more people at the live shows, and thanks to all who’ve been coming and supporting us over the years. Thank you too for your time!!” ends Rob appreciatively.

“Thanks to everybody who supports us, and comes to the shows. Let’s keep great rockin’ music alive!” finishes Ralf.

Great band, great songs, and it’s definitely a great idea to be goin’ old school with The Rob Ryan Roadshow any time soon!

We used to call it high energy honky tonk, but now I'd rather call it roots music explosion because there's so much more to it."

Rob and Ralf from The Rob Ryan Roadshow shared one high moment and one, well, rather strange incident with Famous Last Words (FLW) asked about any experiences when out on the road.

“Playing the Montreux jazz festival two years ago was a real thrill, and to be received the way we were was awesome.”