Offering a glimmer of hope in an otherwise difficult year is Before We Fall, and current record Healed By Fear.

There is a first time for everything. Heading into unknown territory for this particular music paper, Hungary to be precise, and coming out the other end with a new name to add to our file of interviews over the years is a modern metal band who go by the name Before We Fall.

Various snippets of information reveal a band in tune with issues affecting many of us right now, and especially in relation to mental health. Before We Fall confronts this subject via their recently issued and second EP ‘Healed By Fear’. In fact, it is the title track from this latest record which tackles issues of mental wellbeing from a personal perspective, and one that suggests in order to overcome feelings of anxiety one has to pay a visit to those deepest and darkest thoughts in an attempt to conquer them. Not forgetting of course why we are here and that is because the EP ‘Healed By Fear’ just happens to be a thoroughly compelling record from start to finish, with its lead track already a contender for a Top Ten finish in any music poll being wheeled out at the end of the year. 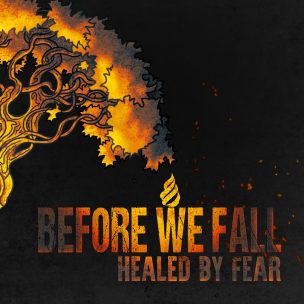 With much to discuss and learn about this relatively new band consisting of Róth Henrik (vocals, guitar), Tagscherer István (guitar), Somodi Dániel (bass) and Vadász József (drums), it is perhaps wise to start at the beginning and establish where life began for this Hungarian four piece.

“Before We Fall began as a studio project, after our first two songs (‘Not Our War’ and ‘No Apologies’) were recorded. We decided to complete the line-up with a rhythm section back in 2019.”

Life for Before We Fall in terms of their initial sound can be described as traditionally metalcore with their first EP, ‘Doesn’t Seem Enough’, clearly displaying such associations to this genre. However, there were signs of additional yet very subtle influences where, for example, you can hear a country rock twang in the guitars of standout track ‘Nothing’s Gonna Be The Same’ and therefore suggesting this was a band not content with being labelled under one genre.

Initial impressions this side of the fence and mainly because of current EP ‘Healed By Fear’, there are influences of alternative rock, post-hardcore, screamo and classical music to be added to the main sound of metal, but how exactly would Before We Fall describe their sound?

“We usually describe ourselves as a modern metal band because we use a lot of modern synth sounds besides classical ones like piano, cello or full orchestral strings. Maybe we could call it alternative metal?”

Alternative metal sounds about right. But before all of this, there must have been a few bands who appealed to Before We Fall when deciding on your own musical direction?

“We could mention any metalcore (Göteborg or US) bands from the late ’00s but, for example, Sonic Syndicate had a great impact on our sound especially on the synth/sampler side.”

With latest EP ‘Healed By Fear’ currently on heavy rotation at Famous Last Words (FLW) and largely due to the aforementioned orchestral influences, use of synths, melodic passages, and vocals with an engagingly gruff edge from the band’s vocalist Róth Henrik, not forgetting the importance of the sensitive subject matter, making this an irresistible and certainly standout track. Therefore, considering the attention to detail given to ‘Healed By Fear’ in its entirety, the record must have taken a considerable time to make?

Do you have a favourite track from the EP and if so, what are your reasons for this?

“Our favourite is the title-song ‘Healed By Fear’, because it contains all the features that describes our sound the best.”

FLW is in agreement, but what further details can you provide regarding ‘Healed By Fear’?

“We think that ‘Healed By Fear’ describes our style the best. We tried to mix the classical cello and piano sounds with many modern ones beside it. The lyrics are about inner fears and mental illnesses, which are very personal topics for us. Our singer (Róth Henrik) is writing the lyrics. Each song from our ‘Healed By Fear’ EP is revolving around the topic of finding a way inside to our real self.”

Given the enthusiasm at FLW for your latest EP ‘Healed By Fear’, what has been the reaction in your home country?

“Up to date, we haven’t received many responses to our songs. The few reactions we have received came mostly from friends and people we could reach, and they were rather positive.”

What are your hopes for the EP?

“We would like to reach as many people as possible and, if possible, make their day a little better with our music.”

Is that partly due to a lack of any real music scene in Hungary these days?

“Without good connections, it is almost impossible to receive any reputation in Hungary nowadays, especially for metal bands. That is why we decided to try to spread our music overseas first.”

You mentioned problems recording the EP ‘Healed By Fear’ due to issues of COVID and the lockdowns associated with this, therefore has it been a difficult and frustrating year so far for the band?

“Yes, Covid had a great impact on the whole country. The death rate was high, and we were affected personally as well, so we decided to suspend rehearsing for months. Places were also closed and most of the shows were cancelled during that period. We didn’t have a chance to perform much because of lockdown and we only had two shows right before this happened.”

Has the live scene improved in recent weeks, or are there still problems for bands in terms of live gigs because of COVID?

“Our situation seems rather hopeless at the moment. The prices went up so drastically that it is almost impossible to find a place where you can perform under good conditions. Many places were closed during the lockdown, and the remaining ones face serious financial problems. So, it is understandable that the prices went up, but it’s a pretty difficult situation right now.”

Given the ongoing restrictions, do you have anything planned for the rest of 2021?

“We’d like to receive [more] feedback to our recent EP, while we try to figure out what to do next under the current circumstances. Other than that, we’d rather try to plan for the following year.”

“Thank you for the opportunity!”

(Photography courtesy of Before We Fall)

We would like to reach as many people as possible and, if possible, make their day a little better with our music.”

This is a first in terms of the interviews featured at Famous Last Words (FLW) by featuring a band from Hungary and something we are immensely proud of as FLW aims to cover as many different countries as possible, providing the artists are relevant to our pages. When it comes to categorising bands, Before We Fall is one of those bands who provide a definite challenge because the four-piece fall between metal and alternative rock and, in our humble opinion, it is the latter genre that edges it. However, considering their comments and thoughts mentioned in FLWs’ latest interview that the category of metal has been selected, but this by no means defines who and what this band is about because as Before We Fall mention, “We would like to reach as many people as possible…” and therefore by featuring other influences from rock and alternative rock, not forgetting the orchestral elements, then this band will certainly achieve such an objective.

The End = The Beginning Changing Shape
Back To Top