Emo is a gang worth following.

Famous Last Words (FLW) has a deep affinity with new rising starlets Moose Blood due to their love of coffee, collecting records and, of course, recent 6-track EP ‘Moving Home’. It was therefore a brief, yet fascinating discussion when FLW managed to grab the attention of band member Glenn to reveal a few details regarding all things Moose Blood, and to shed some light on the intimacy of such salacious delights as ‘Evening Coffee’ and the rather Scandinavian looking cover art adorning the band’s debut offering. Before the beans are spilled, however, it might be worth identifying just exactly how all this came together for this Canterbury four-piece.

“Eddy had been sitting on some home demos for a while, and he approached the rest of us to see if we would be interested in making a band out of it. The demos ruled and we were all stoked about them. Then during the summer last year, we finally got round to going into a practice space and finishing off the songs that went on the ‘Moving Home’ EP,” explains Glenn regarding the band’s conception.

With Moose Blood defining their sound as “Emo/whatever”, the songs making up ‘Moving Home’ were quickly assembled which is surprising considering the high quality on display.

“‘Moving Home’ was recorded by our friend Ricky Ricardo at Annex Audio,” comments Glenn. “We actually went back there recently to do our next release, which hasn’t been announced yet but probably will be soon. The record [‘Moving Home’] is essentially our demo (A very impressed FLW) as we recorded the only six songs we had at that point. We’re all really proud of it, and we’re still surprised with the reception it has received.”

FLW is rather intrigued by the cover photo for ‘Moving Home’ as it looks like a residential area somewhere in Scandinavia.

“As for the cover art, you’re spot on, it’s somewhere in Sweden,” replies Glenn. “I’m not sure exactly where though. I follow a photoblog called ‘5on1’ who post out work from a lot of photographers and I knew as soon as I saw that picture that I’d want to use it for something. So I emailed the photographer, Padraig Croke, who luckily was totally cool with us using it for the EP. That particular photo is actually based on a Gregory Crewdson shot, as I love his work. So I think it’s a cool, personal link to have, even if other people aren’t aware of it.”

Considering how quickly ‘Moving Home’ was assembled, is the band happy with the end result?

“We’re all really happy with it,” is the immediate response. “I’m sure all of us notice little parts here and there that we would change if we could, but considering it was recorded in two days, I think we got the most out of our time at the recording studio.”

Moose Blood seem to reflect on the everyday trivialities that life throws up but also the close intimacies of relationships that ultimately result in varying degrees of pleasure and heartache. It remains, however, three tracks which have particularly garnered the attention of FLW, with the previously mentioned ‘Evening Coffee’ tickling our fancy; ‘Moving Home’ and ‘Carbis Bay’. 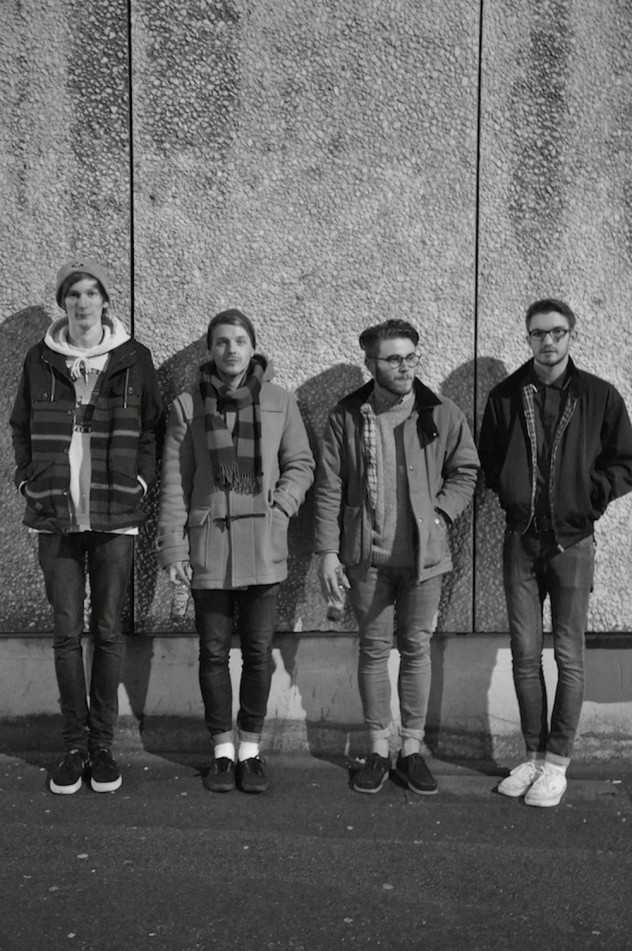 “The lyrics are all very autobiographical,” says Glenn. “For example, the start of ‘Carbis Bay’ is about a date Eddy had; it went so well that he had to write about it. The second verse of that song was written by Mark, and it’s about how he dealt with losing his dad last year,” he continues reflecting the dual meaning of the song. “Elsewhere, ‘Moving Home’ is about living with a girl but things aren’t going too well. It’s about the relationship coming to an end and moving out of the home you shared with her. Finally, ‘Evening Coffee’ is about just wanting to have sex with your girlfriend but you know the house is full of people.”

With only ten shows played to date “so all that fun is still ahead of us,” Moose Blood will soon be adding to that tally due to a few UK dates this month. In addition, Glenn and his fellow bandmates also have a new release planned as he explains:

“We have something really cool coming out for Record Store Day in April and we’re all really pleased about that. In terms of shows, we really, really, really want to tour, and despite the forthcoming dates, we’ll hopefully get the chance over summer to do something about that.”

It seems fitting that the final few words from Glenn, before departing to get warmed-up for the impending live dates, should involve two of their favourite pastimes when it comes to defining a Moose Blood philosophy.

“Drink coffee, collect records. Is that a philosophy?”

FLW is more than happy with that response.

'Evening Coffee' is about just wanting to have sex with your girlfriend but you know the house is full of people."

“I actually dreamt we played SoundWave fest ha-ha. Probably because I was up late watching Paramore videos on YouTube.”

Do you get asked about the band’s name a lot?