Bringing the tradition back to country music is Bug Martin and Gutterball.

Like all good (alternative) country artists, singer-songwriter Bug Martin is no exception to such a tradition that has marked out this genre as rather special.

Taking his first tentative steps in a basement somewhere in New Jersey, the creative journey for Bug Martin has seen him trawl through the arts scene of Baltimore that resulted in several self-released albums and EPs.

After the initial creative exploration, the efforts were deemed satisfactory yet the urge to move to pastures new was even greater. By settling, for the moment, in the more northern location of Philadelphia, the narratives accumulated during these years came to an agreement to form the foundations of current album ‘Gutterball’, issued by Pyrrhic Victory Recordings. 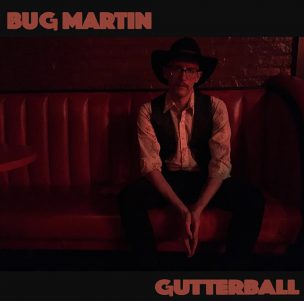 Classic stories of ill-fated relationships, combined with the general hardships of life and the substance of alcohol frequented in attempt to drown out all such sorrows, Bug Martin’s ‘Gutterball’ is littered with such confessional tales. That’s not to say that ‘Gutterball’ is a self-pitying affair because it most certainly isn’t as the album never forgets the importance of a sense of humour as depicted by album closer ‘Broken Heart Blues’ for example.

Part of these feelings are down to experience, but also a knack for clever song writing as Bug Martin possesses both in abundance and demonstrates often via such delights of the traditional country ‘Bartender’ with its late-night, threadbare lure of instrumentation of lap steel guitar and weary vocals. Elsewhere, expect songs full of dustbowl imagery and wistful longing projected by gritty, atmospheric guitars as found during bluesy Americana waltz ‘Blue Eyed Dog’, or spaghetti western edge to former single ‘Dharma Blues’. Nostalgia also rears its head with the exquisite delivery of ‘Diamond In The Coal’ remembering fonder times, which also transmits to a notion of simpler times with part-homage to country legend Jimmie Rodgers’ memory, ‘Jim Rodgers Blues’. 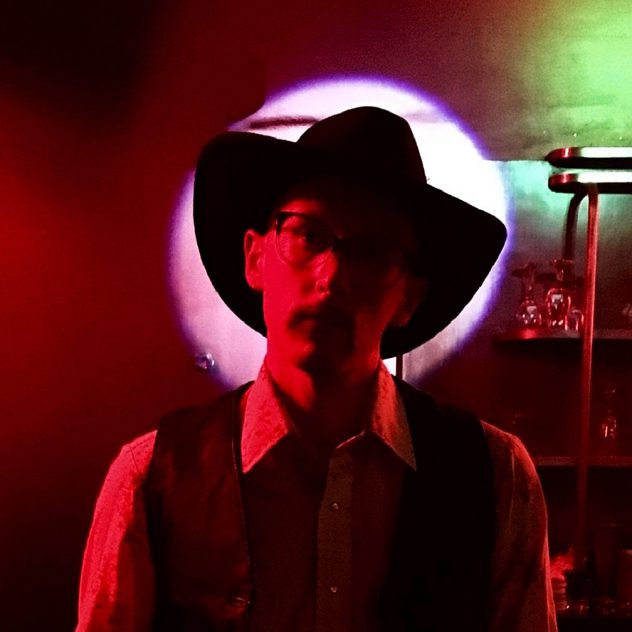 You seem to be readdressing the balance though with ‘Gutterball’?

“’Gutterball’ is a person-to-person album. When I play it live for someone or share it directly it is usually well received. There’s an implicit bias, especially in underground music scenes, against country music because of the awful shame that is mainstream pop-country. Truly criminal what these art-capitalists and music-pimps have gone and done to the genre. Nevertheless, I’m out here banging on the old tune-box, trying to wake the dead.”

Having shared your opinion in terms of defining country music in the present, how exactly would Bug Martin describe his sound when it comes to current album ‘Gutterball’?

“I’ve called it “conscious country” before, and I still like that title. There’s lots of variation in sound on this most recent album, but I usually take the path of the balladeer; observing from a distance, high and lonesome, hoping to convey a truth or a tale to whomever has a mind to listen.”

There seems to be a classic western/cinematic influence concerning some of the songs making up ‘Gutterball’ would you agree?

“I do agree,” replies Bug Martin. “Western music (that is, historical western country music as I understand it) has much to say. It’s highly emotional music, sensitive even. It has a way of conveying a great deal while distilling it down to real simplicity. When I’m writing, it is cinematic in that I’m building a world and setting a scene for someone else to share for just a few moments. These songs may even have lives of their own outside of the peephole in that I share with a listener.”

What inspired you during the creative process for your current album and which artists influenced you when coming up with the ideas for ‘Gutterball’?

“It’s hard to nail down, and I’ve spoken somewhat on this before – I don’t know where my songs come from. I feel sometimes like a radio antenna – I just pick up frequencies and they manage to arrange themselves. I pick up a pen or open my mouth and things have a way of falling out. I end up writing a lot about grief, suffering, etc. because I always think it’s important to keep that feeling close to you. If you can sit comfortably in those tough emotions, you can get a true appreciation for better times.

“All sound is an influence on me,” continues Bug Martin. “I’m happy enough listening to rain on a tin roof as I am a piece of finely crafted orchestration. For this most recent album, I certainly listened to a lot of classic and outlaw country artists, bluegrass artists, and a handful of folk musicians who may not align with ‘country’ as a genre specifically. Townes Van Zandt, John Prine, Dock Boggs, and Karen Dalton to name a few.” 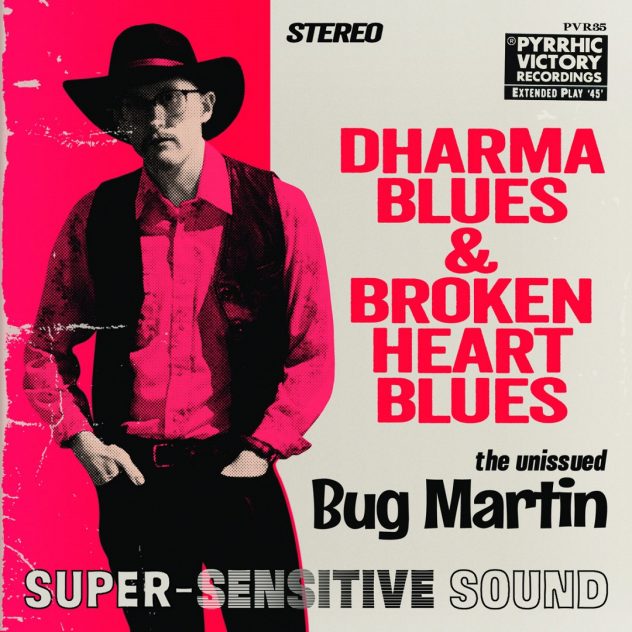 The songs of ‘Gutterball’ seem to be appealing to simpler times and there’s a definite sense of looking back, as you suggested regarding a definition of country music in the current musical climate.

“’Gutterball’ as a title is a sort of homage to a bygone time and bygone pleasures,” answers Bug Martin. “You’ve played the game; the score has been settled. The title has elements of fun and chances to be taken but in a “heads you win, tails I lose” way. The album is about stepping back and looking at a journey, learning from it and laughing at it with due respect.”

Is the album autobiographical in any sense?

“In terms of who the speaker is on these tracks, I’m sure there are moments when my opinion bleeds in. But who I am and what I believe is less important than what’s going on with the album,” comes the reply.

FLW is certain that you have plenty of material to draw from considering previous creative works and a life that has seen you travel to a different location in America only recently.

“The album was recorded in my former home in Baltimore, Maryland. I took a longer break in between this album and the last than I usually take because life sorta got in the way. I was very busy with other work I was doing since putting out the ‘Three Women’ EP and ended up feeling restless, dissatisfied, and hollow in a lot of ways. I bought an old cassette recorder for $5 from a thrift store one day and decided to allow myself time to open my mind up and let some things out. After spending a few months writing, re-writing, and recording demos on a tape, I quit my job and went travelling for a week or two. When I got back, I was in the right headspace to turn the best of those demos into what ended up being the album in full.”

There seems to be a personal touch to the latest album, from the songs to the artwork, any thoughts?

“One of my favourites on this album is ‘Untitled (ed. 2019)’. I wrote that song about eleven years ago and revisited it for this album because I think I was at a turning point in my artistic journey, and in my life in general when I wrote it. I find myself in a similar place of large-scale change now. In terms of the album’s artwork, my partner, Mia Fiorentino, took all the photos for the album. She’s got a great artistic eye (she’s an abstract painter) and I trust her more than I trust myself with most things.” 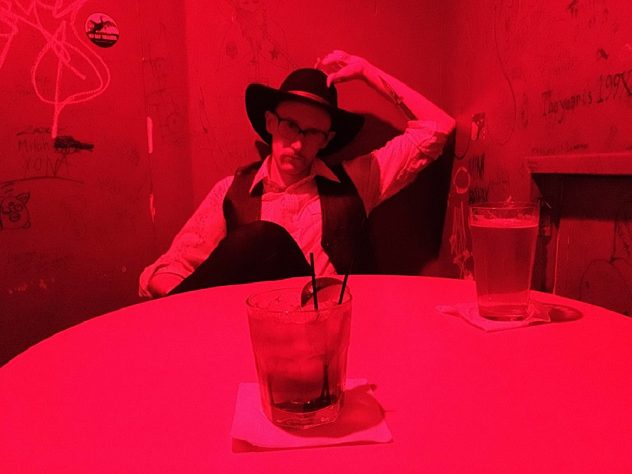 Life would appear to be following some form of plan for Bug Martin now, especially after the assured quality of song writing throughout latest album ‘Gutterball’. But if it wasn’t for life’s setbacks every now and then, it’s likely that the songs lining ‘Gutterball’ would never have come to fruition as the artist himself hints at when writing new songs only recently: “I spent a day at home recording some new material and overall having a really peaceful morning, then walked out of the house and got attacked by a pack of dogs!”

Whatever the immediate future has in line for the songs of Bug Martin, ‘Gutterball’ is an album that deserves to be heard in 2020 for those who missed out when the long player was issued last year.

“All I want for ‘Gutterball’ now is to find its way into the hands of those who need to hear what it has to say. Looking forward, there are many more songs on the way, hopefully in collaboration with others.”

’Gutterball’ as a title is a sort of homage to a bygone time and bygone pleasures. You’ve played the game; the score has been settled. The title has elements of fun and chances to be taken but in a “heads you win, tails I lose” way."

Remembering how he got here in the first place as far as song writing goes, Bug Martin picks out three albums that are passing the time for him when he’s not writing his own compositions.

It all started for me in a basement in New Jersey where I taught myself every instrument I know by listening and playing along to all kinds of records. I must’ve put everyone else in my house through hell on the long journey to sounding half-way decent! That said, when I’m not writing, I like to listen to other albums and the three albums I’m currently listening to are:

A compilation album of selected country blues, Cajun and folk music from 1927-1948 called, ‘I Don’t Feel At Home In This World Anymore’ from Mississippi Records.

Country Rockin’ Trio One Man And His Band
Back To Top