In It For The Long Haul

After more than a decade together, Imperial Leisure show no sign of ageing, such is their appetite for music, partying and lately, home improvement!

Having being a part of the musical landscape in the UK for some considerable time, the alternative ska beat of Imperial Leisure has somehow slipped under the radar of Famous Last Words (FLW).

Word of this fascinating blend of indie, punk and ska combo reached our shores only recently via the band’s lyrically spitting bile, yet knees up musical vibe of single ‘Nasty Boy’ and whistle-stop visits of Voss and Oslo for a couple of live dates.

Apart from the ragged, infectious qualities of ‘Nasty Boy’ capturing our attention, it was the accompanying video to this smash single, issued as part of the band’s ongoing slog of the summer festival circuit, which added to their appeal and suggested a band not short of a few ideas, but also that the spirit of rock ‘n’ roll is alive and well and living in the centre of London. 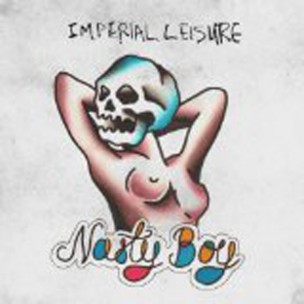 Correspondence was therefore dispatched to enquire about the availability of an interview with this London-based band, considering their gruelling schedule with the aforementioned summer festival dates which are coming to a conclusion this month. The outcome was positive as frontman Denis Smith (aka Dboy Dnice) of Imperial Leisure was more than happy to provide the answers to the questions that FLW was eager to ask.

Without further delay, the secret to Imperial Leisure’s longevity seemed the most obvious starting point to kick things off, considering the constantly revolving conveyor belt of artists that are here to today and often gone tomorrow. Over to you Imperial Leisure…

“You know, some people get married and they work at it; ‘it’s tough’ they say, raising kids, keeping it interesting, looking after each other, staying in love. Well, being in a band is nothing like that, if you bitch you get a slap, if you ditch you get ditched. Therefore, do for band or do one, no compromise! Most important of all, stay drunk or loaded at all times, that’s how it works for Imperial Leisure.”

Considering the duration Imperial Leisure has been together, can you remember how the band actually formed all those years ago? 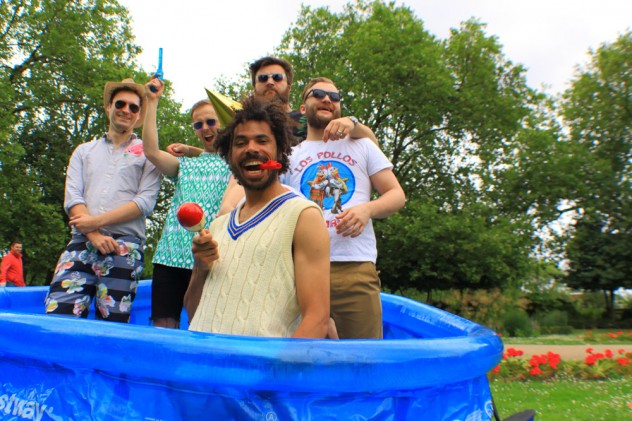 “I woke up in a park f***** out of my head and suddenly I started shouting Rage Against The Machine lyrics. AJ, who left the band due to his head getting so big we couldn’t fit him in the van any more, pulled me up and asked if I could MC at their next gig as their usual MC couldn’t make it. Naturally, I agreed to do it. After I played the gig, which followed with a few more, everything was going great until we ended up f****** each other’s girlfriends! So, the joke wore thin and we split up, but those of us with a sense of humour reformed as Imperial Leisure; a name given to us by my then girlfriend, who was formerly a girlfriend of an ex-band mate who is sadly no longer with us.”

Rage Against The Machine seemed to wake you from your drunken slumber before the serious work started all those years ago. Therefore, are there any other influences you’d care to mention which have played their part in terms of influencing the Imperial Leisure sound?

Judging by the abundance of influences musically, how would you sum up the music of Imperial Leisure?

“We are gripping on to the belief that alt-ska is the best thing ever and that’s what we want to sound like. Our sound is a progression of what happens to a teenager’s mind when you give it sex, booze and drugs while exposed to grunge, jungle, rap rock, hip-hop and indie, but then you put it in the context of ska and reggae with a hint of now.”

It seems that Imperial Leisure has been freshening things up of late with the record deal with FXD Records. How did this record deal come about and what are your hopes going forward?

“Signing to a record label is not too dissimilar to selling your arse for someone to f***! For example, you get introduced, there’s a bit of small talk – you both know what’s going on here – and provided both parties are happy, money exchanges hands with someone getting shafted and someone getting paid. Everyone involved has to sweat, but who walks off with a limp is an equation that is still a mystery to me. So when a band signs to a label once the initial slap and tickle is done, you have a drink and promise not to fall out. Perhaps I’m being a tad cynical, but to be fair FXD are really cool, they let us slam it up ’em as often as they slam it up us! We met thanks to an introduction from Jamie Jazz (ex-king blues guitarist) and it’s been a case of so far so good.”

While we’re on the topic of recent happenings in the life and times of Imperial Leisure, the band’s current single, ‘Nasty Boy’ seems to be a touch peeved by someone’s actions…care to elaborate?

“Oh, thank you for asking!” replies Denis with genuine surprise before launching into an improvised verse concerning the individual at the heart of ‘Nasty Boy’. “Well, it’s a jolly little ditty about a man that’s quite shitty, not down for nitty gritty but loves to be head of committee, alas he’s no credentials non-existent testicles, thinks he’s something special, we all wish he’d shit up and settle. Basically, it’s a punk song about some person, released on a tiny label, and we weren’t expecting much!”

Despite any implied grievances on your part regarding ‘Nasty Boy’, what have the responses been like generally to this current single?

“To be fair, all things considered, the responses have been ok, with the festival circuit having lapped it up so far.”

Was the video accompanying ‘Nasty Boy’ completely improvised considering that it begins with Imperial Leisure at (the end of) a gig?

“Funny you should ask because some poo eating son of a sour milk lactating rabid vole online had the cheek to insinuate the video had been staged…outrageous!!!! I will track down and slaughter this person and have their gene pool eradicated [laughing].”

How long did it take to put the video together and who came up with the idea?

“We had a party with the theme being, smash the shit out of my house [laughing]! The gig preceded the party and a chap by the name of Ell Bobin filmed the whole thing. A year later we needed a video, so I telephoned Ell and he cut it to ‘Nasty Boy’, it was all a lovely coincidence. In retrospect, I realised that we were lucky nobody got hurt, we were totally winging it. I lost my house but we gained a video and at least three band members got laid that night!  A worthy moto in music is to be yourself and record everything. It’s amazing what you can get if you follow that simple rule.”

How are the ongoing gigs and festival performances going?

“Some gigs are clean and family friendly; some are depraved hovels for the great unwashed. We swing between both riding a three-dimensional pendulum with varying degrees of good and bad as it rocks from side to side, up and over, round and round. In the end we drink, we play, we dance, we go home, we ebb, we flow but yeah, Boomtown was the best gig ever, closely followed by Secret Garden Party and Rebellion.”

Will the band be entering the recording studio soon to record a new album?

“Right now, we’re recording our third album. We have been test driving a few of the [new] numbers at festivals this summer. The new songs are going down well and they’re a throwback to our first album, but with more blood, sweat and fury. Our refreshed line-up, featuring Ben Bridges, Jack Emmings and Richard Cox, has been really effective and we’re excited to be recording with some fresh legs! The new album should be out early next year. Prior to that, we’ll be smashing out a Colab EP featuring friends we’ve met along the way.” 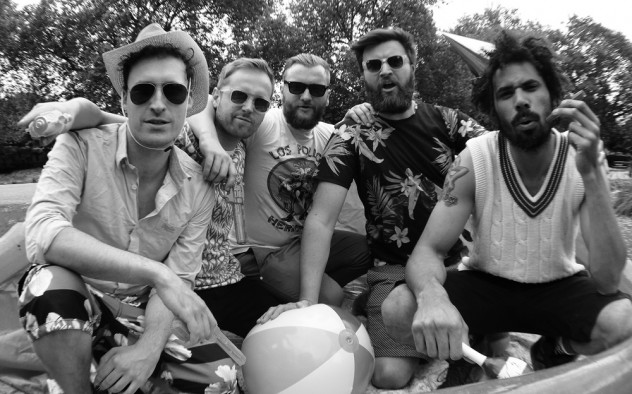 If there was one thing that Imperial Leisure could have right now, what would it be and why?

“The whole world to live as if it was in a really cool festival where nobody got harmed and we all lived in a perfect balance for infinity and forever regenerating with love.”

What do you think that you would be doing if not for Imperial Leisure?

“I’d be sitting on the beach of a tropical island with the girl of my dreams; she would be walking out of the sea holding a knife and a large fish in a net which I’d cook for us as the sun sets on another beautiful day.”

Apart from the new album that is in the works, are there any further plans concerning Imperial Leisure that you’re willing to share right now?

“We never really plan far enough ahead, but next year we hope that we’ve grown enough in popularity to tour extensively outside of the UK.”

Do you have any final words for FLW before heading back out on the road for the rest of the Imperial Leisure tour dates?

“We sometimes have our little fantasies about where we think we are heading; such as the main stage at Download or in the mouth of a lad’s mag cover girl, but then reality kicks-in, along with the hangover, and our hopes and dreams are promptly dashed. As always – f*** the budget – do what you want, when you want, all the time.”

The new songs are going down well and they're a throwback to our first album, but with more blood, sweat and fury. "

With their alt-ska music thrilling many audiences up and down the UK, Imperial Leisure seem to be having the same reaction to their version of home improvement. Denis Smith of Imperial Leisure explains how the video to their single ‘Nasty Boy’ came together.

“We had a party with the theme being, smash the shit out of my house [laughing]! The gig preceded the party and a chap by the name of Ell Bobin filmed the whole thing. A year later we needed a video, so I telephoned Ell and he cut it to ‘Nasty Boy’, it was all a lovely coincidence. In retrospect, I realised that we were lucky nobody got hurt, we were totally winging it. I lost my house but we gained a video and at least three band members got laid that night!  A worthy moto in music is to be yourself and record everything. It’s amazing what you can get if you follow that simple rule.”