With several EPs to their credit, Clockwork Radio is steadily building a name for themselves with some rather intriguing tunes.

Having met through a mutual love of ping pong, of all things, Clockwork Radio has slowly, yet steadily, been making a name for themselves on the indie scene. After a succession of EPs, each marking a triumphant step towards a much anticipated long player (hopefully), it would seem that this four-piece know a thing or two about keeping their sound fresh due to the diversity on offer throughout their recorded work to date.

Recent release ‘UBUNTU’ is great testament to such diversity with the uplifting ‘Feel It Up’, hinting at baggy era ‘Madchester’ during its soaring chorus, to the slightly darker pastels of ‘Free Now’ and roaming qualities of ‘Tara’s Twin’.

It’s with great anticipation, therefore, that FLW managed to track down Rich Williams – lead vocalist of Clockwork radio – at the tail end of yet another lengthy tour of the country in order to seek answers to the compelling subtleties this band seem to churn out with apparent ease.

“’UBUNTU’ came out of our last European tour; from jams in soundchecks, etc. We recorded the tracks initially in Wales and then finished them in Manchester when we came back. Compared to our other EPs, we managed to realise the sound that we were aiming for a lot more with ‘UBUNTU’. At the same time, each of the songs are still evolving live, and for the next record, that we have just started working on, we are going to try and capture even more of the live band sound.”

We particularly like the songs ‘Feel it Up’; ‘BDLP’ and ‘Tara’s Twin’. Can you shed some more light on what these songs are about please?

“Most of the EP has similar themes running throughout – all relating to the ideas of Ubuntu. ‘Tara’s Twin’ is probably the most abstract – it’s based around an entry in a dream blog by Manchester-based singer Jesca Hoop. ‘Feel It Up’ is mainly about how people relate to each other and trying to think outside of yourself in how you treat other people by realising that life is too short and to not go through it in a negative way – if that makes sense? I still don’t know completely what ‘BLDP’ is about yet. I think it’s about not being comfortable in a situation or relationship and needing someone to help ease your mind.” 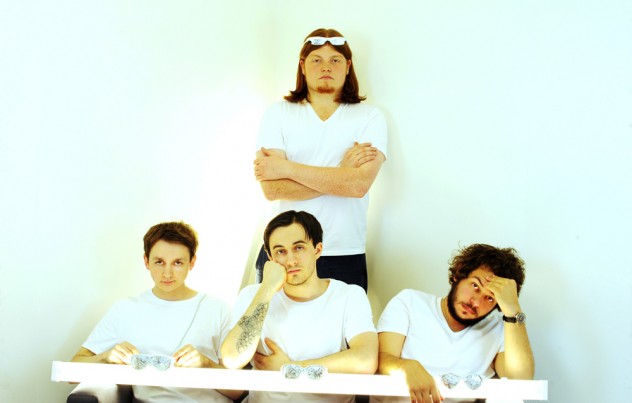 Clockwork Radio is definitely an intriguing oddity in a very rich minefield of current talent, as new bands seem to be appearing by the dozen on a weekly basis.

“We just create music that interests us and isn’t really influenced by what’s the popular thing right now, which is nice because you feel really proud after all the work you’ve put in to create something that really is yours. I like to think our sound is constantly evolving – largely through our touring and jams. There will always be a lot of competition from bands, but we just want people to hear our music and decide for themselves.”

Is there a Clockwork Radio philosophy?

“Ubuntu & sharing music,” comes the immediate reply. “People can download all our EP’s for free over at http://www.clockworkradio.co.uk/download.”

As the band gear up for a potentially prosperous year by working through some new material, as well as reworking some older songs for a possible album and, if not, a new EP, Clockwork Radio is definitely a band to watch in 2013.

‘Tara's Twin’ is probably the most abstract - it's based around an entry in a dream blog by Manchester-based singer Jesca Hoop."

Worthy Of Your Attention When is everything enough?
Back To Top