All The Best Tapes Has Just Released Their Debut Album That Looks Set To Blaze A Trail Across The UK with Its Progressive Punk Rock.

With the backdrop of an industrial landscape that is Stoke, there is a new band by the name of All The Best Tapes whose debut album looks set to shake the very foundations of this ancient city. Comprising of Marcus (guitar/vocals), Danny (drums) and Luke (bass), All The Best Tapes has constructed a self-titled, full-length player that sounds like a reaction against the very surroundings they find themselves residing in, as their combined efforts deliver an exhilarating blend of post-punk with elements of hardcore and guitar riffs from the manual of progressive rock but with a definite grittier edge.

As with all new bands, a general introduction to the foundations and inner workings is always a good starting point, and something vocalist and guitarist Marcus, from All The Best Tapes, was willing to provide details about, and the unfortunate luck the band has experienced with bass players! 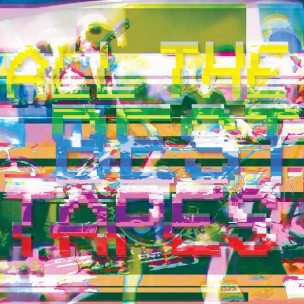 “All The Best Tapes was created in late 2010 and early 2011 by Danny (drums) and me. We recorded a five-track demo titled ‘All The Kids Hate All The Best Tapes’, which I played bass on. The demo caught the attention of an old school friend of Danny’s, Max, who became our new bass player. Through Max, we met our now bass player, Luke, as they had played together in Panama Rise. Luke came to a show and was digging it and was looking for another band, so we popped the question [about joining us] and the rest is history. That would be the touring line-up for our next two records – ‘This is Not A Record, This is All The Best Tapes’ and ‘The Gnar’ – until Max’s departure. I gave my old friend and former Disappointments bandmate, Tom, a call and he was into playing with us. We continued to tour as a four piece until Tom left during the summer of 2013 due to differences in where we thought things should go. So, as mentioned earlier, Luke picked up the bass and we wrote our first album together, which is where we now find ourselves.”

How would you describe All The Best Tapes’ sound?

“It’s hard to pin down. We used to be a little more straight up and easier to describe, but with this record all that’s gone out of the window. It’s whacked out progressive rock on punk rock steroids. There are literally no rules anymore. For example, if we want a guitar-synth pad passage to samba tom-work whilst singing about the potential cold edges of the universe in falsetto, then we’ll do it. If people want to call that pretentious, then let them as we enjoy playing it.”

You have been described as coming from ‘the industrial wasteland of Stoke’. Is this a fair description of Stoke, with the emphasis on ‘wasteland’?

“Maybe unwillingly yes (There’s a title for Noel Gallagher, FLW)! Our city is a bit of a dive [not the most attractive], but where isn’t? It’s home to real, salt of the earth folk and is famous for the oatcake, great music and the closest form of English to Anglo-Saxon you can get with the Potteries dialect.”

“Guitar wise I love the phrasing of players like Tal Farlow and Robert Fripp; their arrangements and chord structures just hit the spot so hard. In terms of writing, I just sit and throw ideas together that are born of a certain mood or atmosphere, often the outcome of which is distantly related to the idea I first adopted when all of this began. I know Danny really loves Neil Peart’s work in Rush (who doesn’t?!) and you can hear that in his fills and ability to set the pace whilst remaining the tightest cog in the machine. Regarding Luke’s inspirations in terms of his bass playing, I’m unsure about. However, I know he’s a big fan of Nick and Nate from Tera Melos’ work, plus he’s a big Tom Erak fan, so I’m sure that’s crossed over into his bass work.”

Can you provide some details regarding your debut album ‘All the Best Tapes’ in terms of when and where it was recorded?

“For the first time ever, we decided not to work with Dan Rowley at Tremolo Recording, which personally made me a little nervous as his studio is my comfort zone. For example, I know the equipment, the pace of which we work and I know Dan rather well. For the album, we chose to record with our long-time pal Bob Cooper at HQ Studios in Manchester and he absolutely pulled it off!  As mentioned, we knew Bob from before, so working with him was a joy, and we have things in common such as being a fellow tone nerd! The recording of the album involved fifteen-hour days, with eleven hour solid guitar tracking sessions as well. We tracked the record in about five days. Then Bob mixed it in his home studio in a couple of days and our friend Paul Hundeby from City of Ifa/Light Black mastered the record at City Pro Recording in Florida. I love the sound of this record; a real depth and precision [to it], but it still breathes and feels organic as good records should!”

Can you provide any clues as to the overall meanings of the songs ‘Life of Gold’ and, more controversially, ‘I’ve Been Bored Since 9/11’?

“‘Life of Gold’, lyrically, is a romanticised look at heaven and the prospective afterlife. The song is something I wrote in the depths of prescription medication whilst feeling quite airy and supremely relaxed. All of my lyrics I try to pen in a style that pleases me, in the sense that the words on their own are equally as strong as when singing them. The other song, ‘I’ve Been Bored Since 9/11’ is a quote from the TV comedy ‘Peep Show’ which I felt sums up the feelings of a lot of people of our generation. For example, the event that changed the world in which we live in for the most part, the increase in CCTV and focus on a hyper security state, and the incident future generations will look at and view as the event that changed everything. From the heyday of the late 90’s new age movement, to the capitalisation of counter-culture through big business and the erosion of privacy through the internet, that’s our legacy and that’s where it started.”

Current plans for All The Best Tapes?

“At the moment we’re concentrating on just getting this record out there and playing live whenever we can.”

Do you have a final phrase of the day?

We used to be a little more straight up and easier to describe, but with this record all that's gone out of the window."

Marcus, All The Best Tapes