The Sound Of The Underground

Grunge is alive and well and residing in Finland.

The capital and largest city in Finland just happens to be Helsinki and this is where you will find three-piece band Giant Giant and their recently released debut album of the same name.

With a hefty flashback of late 80s and early 90s grunge springing to mind once Giant Giant’s LP gets underway, the dense cloud of lo-fi guitars and distorted noise interspersed with thin veils of melodic driven tunefulness is really something to be very proud of indeed. 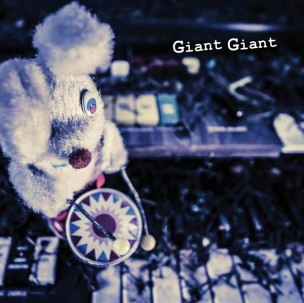 Proud because Giant Giant is the very epitome of the term independent when it comes to music, due to lead singer and guitarist Jukka Helminen responsible for writing all songs to be found on the band’s debut album, with fellow bandmates Marko Haikonen (bass) and Heikki Saarinen (drums) adding their input via song arrangements and, of course, musicianship. But it remains an album with the feel of a genuine hands-on approach, self-financed and the kind of which (look to the songs ‘Champagne’, ‘Almost Right’ and the quirky ‘I Shot The Porcupine’) wouldn’t have sounded out of place next to the frayed edges and implied sense of lethargy of a Dinosaur Junior or Evan Dando’s The Lemonheads back in the day. In fact, it’s as real as the everyday grease and grime found on any car mechanic’s overalls that may throw up the suggestion of the mundane realities of life, but an existence where fleeting moments of beauty and intrigue can also be found, and this is where ‘Giant Giant’ the album sits perfectly.

With the dust not even settled on their debut recording, Famous Last Words (FLW) decided to send word to the trio in Finland to learn more about their time together as Giant Giant, and to establish the driving forces behind their self-titled record that is close to wearing itself out on the office player here at FLW HQ.

“In 2012, I started to come up with all these new songs,” begins elected band spokesperson Jukka Helminen before continuing, “but I didn’t have an active band at the time. So I asked Marko [Haikonen] and Heikki [Saarinen] if they’d be interested in recording some songs. We’ve known each other for years and we’ve played together in many different projects before. For example, Heikki and I used to play in a band called Elbowhead, and me and Marko used to play in a band called The New Bleachers for a while. We are all members in this experimental band called Maanalainen Sametti that has been on a hiatus for a while as well.” 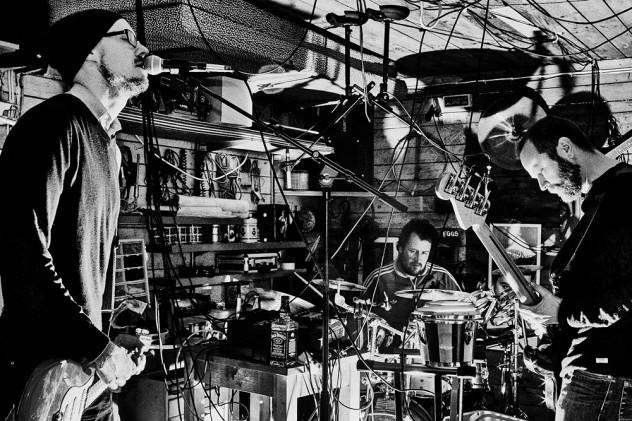 With so much musical activity and a busy schedule between all three members of Giant Giant, the proficiency that is audible from your debut album becomes even clearer.

“We didn’t really have to worry about band chemistry or anything like that because we were very familiar with each other’s playing styles,” explains Jukka Helminen. “So it was just about getting together, playing and recording.”

Considering the heavy influence of grunge that blares out from such tracks as opener ‘Dust’ and later ‘I Didn’t Know’, was such a genre of music a clear blueprint from the start concerning this particular project?

“I didn’t have any particular sound in mind when we started. I just wanted to see what happened,” says the Giant Giant singer. “There was just this idea of how we should work and record things. The idea has been to always record the songs straight away because when you first play a new song together with the band, there is this freshness and joy that gets lost after you play it fifty times. Therefore, we wanted to catch that freshness on tape. So our aim is that each song should be recorded the same day we play it together for the first time, with some extra guitars, keyboards and vocals being added later on. After it’s successfully on tape, we’ll just move on to the next song. It keeps things fresh and interesting, and you don’t get bored with the songs.”

If grunge was not suggested as a definite focal point for the band when setting out your ideas for the album, then who do you regard as influences for Giant Giant?

“I suppose we all have slightly different tastes in music in our band,” he considers. “All of us bring different kinds of elements and influences to the songs, and everything is then blended together. I rarely have any conscious influences in mind when I’m writing songs or recording them. Whatever comes up and sounds good will do. But I did grow up listening to 80’s and 90’s indie rock like Sonic Youth, Afghan Whigs, Pixies, Lemonheads, Dinosaur Jr, Smashing Pumpkins and also bands like The Smiths, Stone Roses and Spiritualized.  So some of those influences are probably always there whether I want it or not. But we are very open-minded and really like all kinds of music, and we take influences from everywhere depending on what a particular song needs. But generally we are not aiming for any specific sound. We just play and see what happens. If we end up making a good reggae song, so be it.” 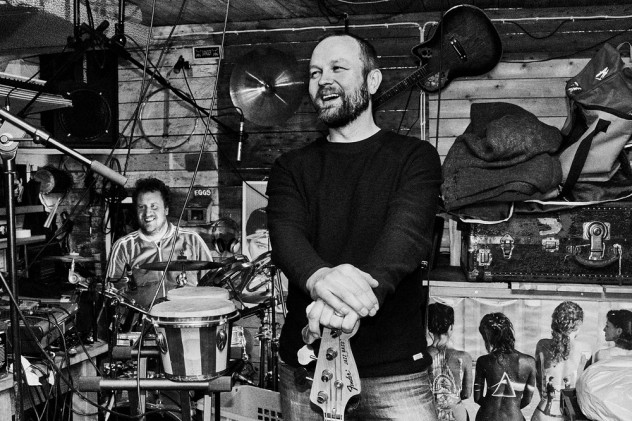 While a reggae version of the driving guitar sound of Giant Giant’s excellent ‘Skylab’, taken from the band’s debut album, might be difficult to comprehend right now, Jukka Helminen’s admission that he rarely has any conscious influences in mind when composing his songs has a definite ring of truth to it, because a number of bands could be cited as possible reference points including post-punk bands such as The Psychedelic Furs, which Jukka puts down to their music being “…guitar-driven, distorted, intense but loose, dark and sometimes a bit twisted. It’s raw but at the same time very detailed” that flags up another ditty ‘Almost Right’, also from ‘Giant Giant’, as the perfect example here.

It’s time to get to the nitty-gritty details of Giant Giant’s record. So, when and where exactly was the album recorded?

“Recording started the same day we first played together in 2012,” begins Jukka Helminen.  “The final notes [of the album] were played in May 2015. We recorded everything ourselves at our rehearsal place and at my home, and then we mixed the songs at Mainmix-Studio in Sipoo, Finland. Songs were mixed whenever we had a new song finished. So the whole process took three years. But as I said before, we started recording the day we first played together. There were a lot of songs recorded that didn’t end up on the album; some might end up on the possible second album. Recording is a continuous process for us.”

Do you remember anything from the album recording sessions that proved a bit of a bugbear or did everything go according to plan?

“It was relatively easy,” confesses Jukka. “The basic tracks are usually quite easy and straightforward to record, but writing lyrics and recording overdubs can sometimes take time. I would say that problems and frustrations are all part of the process. You just have to find the right solutions, and that’s really the fun part of it all. For example, when you find some new aspect to a song you didn’t quite like [before] and then it suddenly sounds great.”

Bearing that last point in mind, do you have a favourite track from the album?

“I’d say, ‘I shot the porcupine’. There is some strange vibe on it that I really enjoy and it sounds completely different than anything else on the album (Hear, hear, FLW). So it stands out. The song ended up sounding nothing like I had thought beforehand. That surprise country middle part really lights up the song, and the saxophone solo on the end, played by Ukko Heinonen, is just great.”

Would you say that your songs are referring to specific subjects and situations or do you write songs that hold various different meanings?

“I don’t feel these songs are about any specific subject. For me, they are bits and pieces of lyrics put together to make a coherent song and a certain vibe. The verse on some songs might be about something completely different than the chorus, which ‘I shot the porcupine’ reflects as it’s partly about this nightmare I had.”

Despite the latter song mentioned providing an idea for a portion of this track, Giant Giant know how to counter the heavier moments in life with a recording session, which has a habit of bringing out the happier side of this three piece as Jukka explains: “I’m always slightly amused when recording. I remember the recording for ‘I shot the porcupine’ causing a lot of laughter. Usually the songs that make you laugh whilst recording are the best ones.”

Finding time for a bit of in-house banter between songs is definitely good for the soul when it comes to Giant Giant, because there isn’t much time for any light to linger between the interchanges of songs gracing the band’s long player as it’s more often than not a downtrodden and gritty affair. Part of this feeling can be linked to Giant Giant’s outlook in terms of where they see themselves in the wider scheme of things when it comes to the larger music scene and music industry in general. 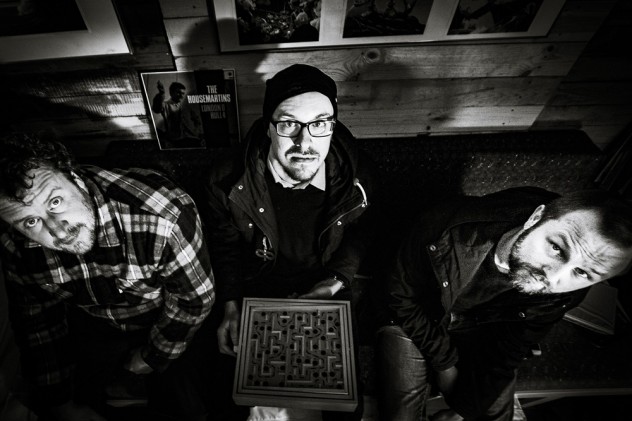 “We are a very marginal band in a marginal location just enjoying playing and creating music. I don’t feel we are part of any scene or music industry really. This is just pure fun. This is more of a personal journey than an attempt to change the world. But if it brings any joy to anybody else, then it’s even better.”

Personally, FLW wouldn’t have it any other way because remaining on the fringes is what will (to borrow Jukka Helminen’s expression) “Just keep it fresh” for this Finnish trio, and continue to excite the senses with hopefully more distorted guitar-driven songs if the band consider to record a second album.

“We’ve got some 20-30 new songs with drums, bass and guitar recorded. We’ll finish those and we’ll have a nice second album out someday I hope. Playing gigs has not been in our plans, but you never know. We’ll see what happens.”

We are a very marginal band in a marginal location just enjoying playing and creating music. I don’t feel we are part of any scene or music industry really. This is just pure fun."

It might be old junk to someone else, but to Giant Giant it proved an invaluable treasure that provided the major inspiration and main piece in the jigsaw for their cover art gracing the band’s debut album ‘Giant Giant’. Lead singer and guitarist Jukka Helminen explains more.

“I bought that cover bunny to be used in our music video for the song ‘Dust’, which is from our debut record. The bunny looks a bit messed up and has only one eye left and I thought it would look good in a video. So then Matti Saarinen did the video and also shot some images. Those images then ended up on the cover. All the images on the cover are by Matti.”