Worthy Of Your Attention

The Caezars shakedown their wares in preparation for album number two.

Draped across the ropes and clinging on for dear life, the final bell is imminent. Any hopes and aspirations held for this evening’s performance has clearly dissipated for The Caezars due to a deathly silence greeting the conclusion of nearly each and every song from the unreceptive crowd. Despite further endeavour to win over the silent majority, the final blow is exerted for this plucky four-piece after a brief yet stinging ‘She Said’ before band exit without so much as a parting farewell and justifiably so.

Clearly something was adrift this evening, and that wasn’t all down to the unappreciative crowd, as band members appeared irritated from the off swapping knowing glances across the compact stage only to be compounded further once the realisation became apparent that the performance was over before it began. However, the final decision of the overall outcome of tonight’s performance was not unanimous, as FLW was enthralled by the events unravelling before our eyes. Yes, it was a disjointed, bad tempered affair but such irritations merely enhanced The Caezars’ performance as there was an extra bite to several of the songs with lead guitarist Danny attacking his guitar stagefront as if his life depended on it, and admirably supported by the enthralling AJ Denning going off like a firecracker across the stage in a maze of directions with mic cable whipping left and right as if to signal the inherent annoyance felt this evening.

With a full-length player and appropriately titled six-track EP ‘Worth The Attention’-considering events witnessed this evening – under their collective belts, The Caezars are showing signs of greatness, which hasn’t escaped the likes of Mark Lamarr and current touring partners the Kat Men, whose Darrel Higham is currently helping out with the band’s next album.

With all of this in mind, FLW decided to dust down the tape recorder in order to gain some inside information regarding that fateful evening opening for the Kat Men to ascertain whether The Caezars’ frustrations is simply due to a lack of attention.

“No, not at all,” comes the immediate reply from lead singer AJ Denning despite acknowledging the band were not at peace with everything during that particular evening back in October. “There had been a mistake with that one gig in terms of organisation, which ended up with us going on fifteen minutes after the doors opened and from there it never really got going. I just think it was one of those gigs where it starts bad and just carried on really. I remember thinking I don’t want to be here anymore, only we had to stand for another twenty-five minutes! The title of the EP ‘Worth the Attention’ is just a lyric from the song, which actually has nothing to do with the band as the lyric is: ‘She didn’t think you were worth the attention’. I think it wasn’t ideally our crowd because the Black Kat Boppers [second support band] performed more authentic sounding rockabilly and rock ‘n’ roll, which the crowd seemed to prefer and probably didn’t help either! But that was just the one bad gig,” he finishes reassuringly.

There remains, however, a nagging doubt regarding The Caezars status in the music industry. It would appear that this rock ‘n’ roll unit are at some sort of crossroads musically, as the band attempt to shake off the ‘rockabilly’ tag often associated with their sound, but career wise as well, due to being in the knowledge that their soon-to-be released sophomore album could really shape their fortunes for good.

“I think we’ve done well in the past year,” chips in Mikey the band’s resident drummer. “When we first started, we played on the ‘rockabilly’ scene and for that scene we had the best time possible that we could have had for a band in terms of gigs and success, but we’re trying to broaden our horizons now.”

“I’m not even sure if it’s that though, is it?” questions AJ in his slight West Country drawl. “I think that you can’t stay in one place as you’re always learning and always trying and always putting the feelers out and giving something else a go just to keep yourself happy. We have been playing every weekend for three years and we barely do any covers now because we’ve written enough over these three years. You’ve got to keep yourself happy and proud of what you’re doing otherwise it’s going to drive you a bit mad. If you’re not happy, then what’s the point?”

It is safe to say that The Caezars music sits comfortably with the rockabilly revival scene, despite some grievances from the purists, but also the band are in an envious position whereby their sound is equally current in the sense that it can sit alongside the indie brigade; hence their support slot with indie darlings The Vaccines.

Despite such opinions held by the band, it remains that acts such as The Ceazars are often categorised in hasty fashion when it comes to recognition from the national press and gaining national airplay; something of which is not lost on the band.

“It’s kind of a tough time to talk about it now,” ponders lead singer AJ regarding The Ceazars’ recognition in the wider scheme of the music industry, “because we’re between albums at the moment, if that makes sense? We did get some songs played from the last EP on BBC 6 Music and BBC Radio 2, but they’re always very late at night. So I think it kind of sits there as I know Mark Lamarr used to play our records and we performed on his show, God’s Own Jukebox’. Such coverage gets you somewhere on the fringes, but I don’t think the music industry knows what’s going to be big and important next, as I don’t think even they have an idea. I think they just look for that something that ticks the right boxes and it’s up to them in terms of how much money they’re willing to put behind it.” 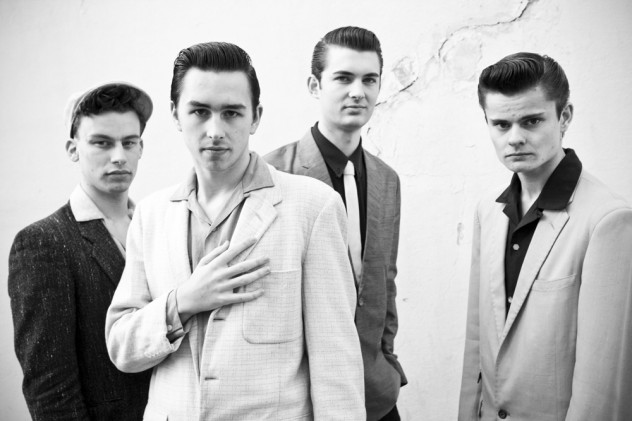 Having toured relentlessly again this year – bringing the curtain down in rip-roaring fashion with successful excursions to Russia and then France – The Caezars is primed for yet another hectic schedule in 2013 with more gigs planned and the much anticipated follow-up to ‘Shakedown’. With Darrel Higham and Big Boy Bloater behind the helm steering The Caezars vessel to hopefully greater things, FLW is keen to learn of their involvement.

“Darrell Higham talked with us, and it was Big Boy Bloater who recorded us. We spent a couple of days in the studio and we found that it suited our vision a bit more,” explains AJ.  “It was more relaxed, as we did not have to rush so much, and we felt that we could put more time into really thinking about making the songs record well, because there’s a difference between live and recorded [sound]. So we just went down that route instead.”

Considering Darrel Higham’s pedigree in terms of his recorded output to date, the chance to work with one of its pioneers in relation to the rock ‘n’ roll revival scene must have been a revelation for The Caezars, especially after the hasty manner in which debut album ‘Shakedown’ was assembled.

“It was quite rushed because we only had a day to record it [‘Shakedown’],” responds AJ to the memory of their recording session stateside. “We had laid down more songs than what went on the album, but I think the record label was very busy at the time. I’m trying to say it diplomatically really, but we weren’t over the moon [with the end result]. Hopefully I’m not going to misrepresent him here, but I’m certain that Darrel Higham’s aim is that he wants rock ‘n’ roll, as a genre, to last for as long as possible. He doesn’t see the rockabilly scene refreshing itself without an input from essentially the mainstream, which is what happened in the 80s with the Stray Cats, Polecats and Matchbox. So I think he really wants to see bands that have got rockabilly roots at the very bottom of them gaining more of the limelight to try and draw more people in; that’s why he came to us as he really wants to try and help as much as he can. I don’t think the new album will be a change in direction or sound. As I said, I think we’re developing and I imagine there is somebody who will question whether it is pure [rockabilly] or whatever, but I don’t think it was in the first place.”

Call them rockabilly, rock ‘n’ roll, sixties garage or indie it doesn’t matter if you are The Caezars because such trivialities are not important. What matters is that this gang of four is allowed to continue with their highly energetic and frenzied sounds because they’re certainly worthy of your attention.

“You’ve gotta have fun, that’s definitely the basis of it. We’ve always been fairly in tune with each other, so I don’t think we’ve had to think about it too much. We are definitely friends more than we are a band, which sounds really bad as it makes the band sound rubbish!” laughs AJ loudly. “If the band suddenly evaporated, we would all still have as much fun together because we’re all good mates. We always try and have fun and try and keep as much integrity as we can. I think we all just love that Link Wray and ‘Sonics sound, and we base ourselves on that with all sorts of other influences and that is our philosophy. As long as it sounds a bit gritty or a bit weird like Joe Meek, then I’m happy with it.”

Long may The Caezars reign.

Despite a strong connection existing between band members, only two of the group knew each other before The Caezars got together as lead vocalist AJ Denning explains.

“It’s not that exciting, unfortunately. The fathers of Mikey (drums) and Danny (guitar) were both  in bands together during the 80s, so they knew each other. The rest of us met at 50s music festivals. We were all likeminded in our music tastes and wanted to do something about it, even though we lived miles apart. Mikey lived in Cornwall at the time; I was living in Bristol, whereas Danny was in Portsmouth and Steve was in Brighton. So we have all moved a bit closer now.”

A Long Time Coming Radio – Transmit – Diversity
Back To Top