Australian singer-songwriter, Jamie Hutchings, solo album set for UK/EU release end of this month. Renowned on the Australian indie circuit, and much admired by press and fans alike Down Under and further offshore, Jamie Hutchings, formerly of underground indie rock legends Bluebottle Kiss, sees his current solo album ‘Bedsit’ set for release 29/03/19 on Come To The Dark Side Luke. 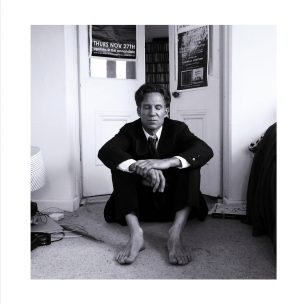 Jamie Hutchings current album is a very personal record, and is his fourth as a solo artist. Containing nine tracks, the brand-new long player was written and recorded in the Australian outback – Mount Rankin to be precise – at a former shearing shed turned production room and art workshop, with use of a 16-track tape machine and a layout comprising of six microphones. It was here that Jamie Hutchings set down a trail of songs that sometimes give the impression of being knitted together given the intimate nature of the record reflecting on life, love and numerous other personal memories, in addition to the pared back sound of the instruments and live feel of the overall recordings.

To provide a brief insight regarding the album ‘Bedsit’, Jamie Hutchings explained:

“Bedsit is a stark record, my starkest yet. It was recorded at a time when I was returned to the world of me, myself and I. I was living and writing for the first time in many years on my own in a single room. And so, the album summons up the feelings you may have when you, for instance, stand on a bulldozed block of land where your old school used to be. But you’ll work that stuff out when you hear it. It’s a personal record, but (I hope) not without humour. I’d wanted to make a record as stark as this for many years, but somehow my songs would always bully me into giving them more. This time they didn’t.”

The album was recorded last year and was released only in Australia. Now, the time has come for ‘Bedsit’ to be heard by a wider audience as it gears up for its official release in the UK and rest of Europe. ‘Bedsit’ is up there as one of Jamie Hutchings most impressive works. Judging by music press reactions to date, others appear to agree that ‘Bedsit’ is an album worth getting to know.

“…after only one listen, Bedsit is an album that…HAS won me over.” Music Musings & Such (UK)

“Recorded in a former shearing shed in the Australian outback, the stark songs are reflective, contemplative and utterly beguiling. Definitely worth a listen.” Northern Sky Magazine (UK)

“If Hutchings wanted to capture the loneliness and inner feelings he had when he wrote these songs, then he should be proud of what he’s produced here because in spite of the bleakness of the musical backing these are some of the most powerful songs he’s ever written.” Penny Black Music (UK)

“Bedsit is a lovely little album full of understated treats that with repeated listens will gently worm their way in to your consciousness.” FATEA (UK)