Lining up a new compilation series this spring is Permanent Records and RidingEasy Records with the ‘Brown Acid: Second Trip’.

‘Brown Acid: Second Trip’ is the second album in the series and is scheduled for an April 20th, 2016. 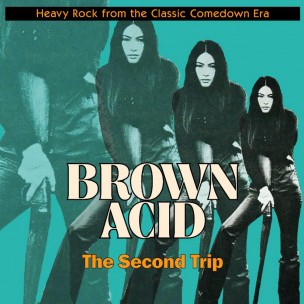 The co-owner, Lance Barresi, of Permanent Records has partnered Daniel Hall of RidingEasy Records in order to hunt down these vintage cuts from the 60s and 70s and in the process found enough material to release the second album in this compilation series.

“I essentially go through hell and high water just to find these records,” Barresi says. “Once I find a record worthy of tracking, I begin the (sometimes) extremely arduous process of contacting the band members and encouraging them to take part. Daniel and I agree that licensing all the tracks we’re using for Brown Acid is best for everyone involved,” rather than simply bootlegging the tracks. When all of the bands and labels haven’t existed for 30-40 years or more, tracking down the creators gives all of these tunes a real second chance at success.”