The Return Of Morrissey

The Return Of Morrissey

Back with a new single and news of a forthcoming album is Morrissey.

The former ‘Smiths front man returns with the single ‘Spent The Day In Bed’, which is the first taste of what’s to come from the new album ‘Low In High School’. 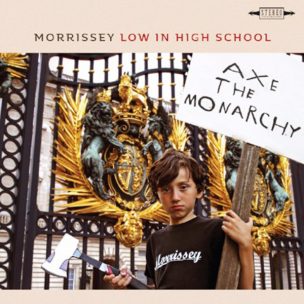 The upcoming album release is the first for Morrissey in three years and kicks off with the single ‘Spent The Day In Bed’ that sees Morrissey back on form with a strong melody and lyrics that rally against the (UK) ‘rat race’:

“Stop…Watching the news, because the news contrives to frighten you. No Bus, No Boss, No Rain, No Train’.”

Expect to hear eleven more songs in a similar vein lyrically to the first single ‘Spent The Day In Bed’ with Morrissey insightful and provocative as ever by commenting on politics and questioning those in authority, as well as touching on relationships from the past during the album ‘Low in High School’.

For those with access to BBC 6 Music Live will be able to hear Morrissey perform several tracks from the forthcoming album ‘Low In High School’ on the 2nd October on 6 Music Live 2017 at Maida Vale Studios.

Further information regarding the album ‘Low In High School’ is that it is Morrissey’s first studio album since 2014, and will be his first on the record label BMG. In addition, the album will be issued via Morrissey’s own imprint, Etienne Records, which is a direct subject of BMG.

‘Low In High School’ was recorded at La Fabrique Studios in France and at Ennio Morricones Forum Studios in Rome. The album is produced by Joe Chiccarelli who has worked with Frank Zappa, The Strokes, Beck and The White Stripes to name but a few. The album will be available in digital and physical formats CD, colour vinyl and a limited edition cassette.

Listen to the current single, Spent The Day In Bed, by Morrissey at Famous Last Words (FLW)