So enamoured was FLW with The Tigerlilies recent EP that there was only one thing left to do, secure an interview.

Taking one step back to borrow a few ideas from music’s rich history seems to be a formula that works for The Tigerlilies. Such a formula works because this four-piece band from Cincinnati, USA, takes their inspirations from the eras of punk and grunge as well as the longer standing genre of pop music. From these chosen genres, The Tigerlilies meld these ideas with their own way of thinking that sees the quartet take several creative steps forward.

Evidence of this meeting of the ways concerning music’s past and present can be gleaned from The Tigerlilies most recent EP, ‘123456’; a predominantly post-punk affair, but one with a strong melodic side to it, and one that doesn’t fail to hail the ‘greats’, which can be heard from the Tigerlilies reverential tribute to the late David Bowie who passed away earlier this year. 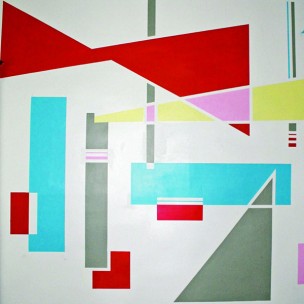 Despite this song being a tribute to David Bowie, news reaches Famous Last Words (FLW) that this particular song crafted by The Tigerlilies was actually written two years prior to Bowie’s passing. A bizarre coincidence one may think considering the timing of this particular track, but one that bassist, Brian Driscoll, and Pat Hennessy, vocals and guitar, of The Tigerlilies were more than happy to clarify in terms of any lingering doubts regarding the sincerity of this song to FLW.

“Yeah, the timing is weird, but that’s what happened,” begins Pat Hennessy in reply to the actual recording of the song ‘Bowie’. “I feel horrible about his death.  He is an artist without equal.  I know that we wrote that in the fall of 2014, and you can see the video that is date-stamped.  I’m sure someone who may not know might think we’re being opportunistic, but ultimately I know when, where and why we recorded it, and it’s just sort of coincidental that we recorded it and he passed.  Strange indeed.”

With the song ‘Bowie’ being rather mellow in sound, what else can you tell FLW about this tribute to David Bowie?

“I really like the epic feel of Bowie,” replies Brian Driscoll. “It’s a love letter to the man, and it’s emotionally vulnerable as a child may write a letter to a hero.  I also love the instrumental beginning and the soaring chorus when Pat comes in and just sounds exultant.  He is a great singer!”

With the discussion of the song ‘Bowie’ providing an introduction to The Tigerlilies and their music, recognition from further afield of the band’s creative credentials has not gone unnoticed as influential artists ranging from Joan Jett, Paul Weller, Violent Femmes and Guided By Voices have all added their voices of approval with official invites of numerous support slots when out on tour. 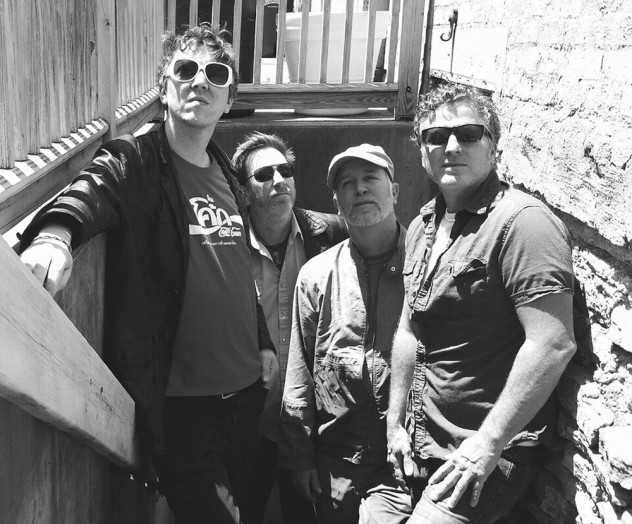 Such recognition of The Tigerlilies recording capabilities stems from a healthy back catalogue of singles and albums issued on independent Midwestern record labels including Atavistic, Violently Hip and Mono-cat 7, but also due to the name the band has built for themselves over the years after countless gigs throughout the States. Add to that a steely determination to hold the seams together after surviving one fatal incident in Dallas, for example, as well as celebrating the good times with the up-to-date and sublime ‘123456’ EP which has renewed the plaudits for The Tigerlilies in 2016, then the quartet from Cincinnati has every reason to feel positive about their future.

“We were at a point where we had some songs we wanted to record,” explains the two members of The Tigerlilies present in relation to the band’s current EP.  “We recorded the tracks, liked them, and were eager to get them out. So we grabbed a couple of songs we previously recorded, and released it.

The EP ‘123456’ was recorded at our practice space, the Lily Pad in the winter of 2015.  It’s the place where we recorded our previous full length ‘In the Dark’ (2014). The place was a shambolic space with mountains of vintage clothing, old toys, posters and some unwanted vermin.  We had other bands in there practicing as well to offset the costs.”

With the EP appropriately containing six tracks, was it a relatively quick recording experience or did the band encounter a few problems along the way?

“The recording process took a weekend.  Our engineer, Jeremy Lesniak, set up the space on a Friday night and we knocked it out.  It took Jeremy a few months, off and on, to mix because of other responsibilities.  Next it was given to Andrew Hamilton at Serf Sound for mastering.  These two guys are aces and really know our sound.  Thank god for them! During the recording, however, there were some rats squeaking in the corner that may have bled onto guitar tracks.  Really the process was very painless.  The frustration came for me in waiting for the mixing to be done.  But you have to make trade-offs – we want Jeremy to mix, but he has a lot of obligations.  And the entire cost of the recording process would not be believed on either coast!”

Did you have any songs that just missed out on making the final EP cut and, if so, what were the reasons for leaving these out?

“I think we recorded the Ramones ‘Howlin’ at the Moon’ but didn’t want to go through the legal hassle of getting permission to use it.  We will often record covers at the end of a session,” answers Pat Hennessy.

As mentioned in our review of your EP ‘123456’, the artwork gracing the front cover is of a standard that should be adorning a wall somewhere in London’s Tate Modern gallery for example. Therefore, FLW is keen to learn of who exactly was responsible for this compelling visual image?

“Pat Hennessy and his partner painted that mural on someone’s wall and we photographed it; sort of an abstract – shape-centred design that we all liked,” Brian Driscoll replies in response to the question. “Pat also did the back [cover] with a letter press from a long-closed high school near Oxford, Ohio.” 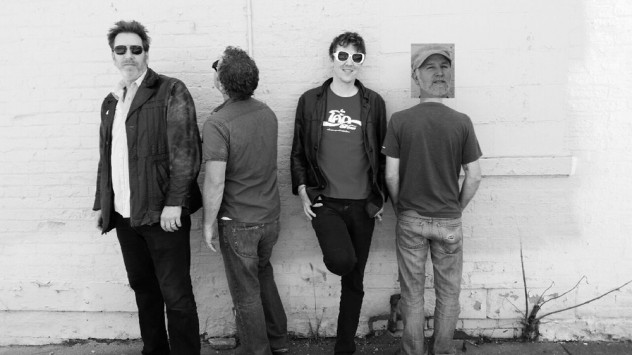 With the current EP ‘123456’ being a springboard as such to remind those formerly acquainted with The Tigerlilies and, in their words, “Noisy guitar power-pop rock, post-punk power pop,” as well as an attempt to attract new followers (It’s working on these shores! FLW), it remains to be seen however, where exactly The Tigerlilies see the band in the current state of the musical environment.

“I have no idea where it fits in really, or if it does at all,” considers Pat Hennessy.  “One of the great things about being in Cincinnati is that we’re in a bit of a bubble; it’s affordable and we can do our thing and organically grow as a band, which is something that we have done.  I really don’t feel we’re in the ‘business’ as such.  We listen to a wide variety of music; see local shows of local/regional/national bands.  We aren’t necessarily trying to appeal to a wider audience; we write the songs that we want to write and play and record them.  I do think that if more people heard the songs, they’d like them, but that’s a whole different job – marketing! However, there are a lot of young, middle and older bands doing great music here, and in the world.  It feels like the ‘underground’ has returned in a lot of ways.  A very DIY ethic seems to be taking hold; no one is waiting to be ‘discovered’, they are just going out and doing it, and I love that spirit.”

Is there anything The Tigerlilies miss in terms of the music scene in the present climate?

“I can say I did enjoy the simpler time of putting up flyers and talking to people about shows,” says Pat Hennessy. “It seems now a band needs a person full-time to work on all the ‘requirements’ to be a band [in the] ‘present’ on-line.  But I also like that a person in Norway or Serbia can hear our band.  Really, the Tigerlilies are a here and now band.  We look to now and the future, and really don’t dwell in the past.  It was fun, but we’re not done!” 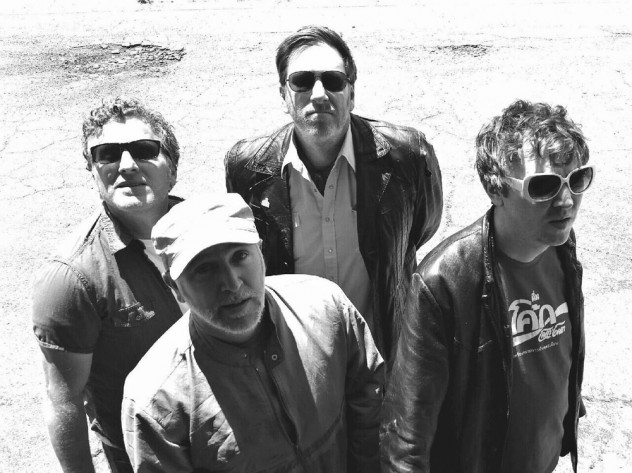 A fine statement indeed because anyone who has taken the time to listen to The Tigerlilies recent EP ‘123456’ will certainly identify with such words as the amalgamation of post-punk and grunge with elements of (power) pop highly impresses, with highlights being the emotional and frenetically charged rhythm of ‘Easy As It Seems’; apparently inspired by “…a guy named Jimbo (Hillbilly Philosopher) who worked with Pat [Hennessy] on the overnight paint crew at CVG airport. They would be doing some difficult move, and he would just say, “Ain’t nothin’ easy Pat.” Pat used that as a template to speak about love, loss, alienation,” to the open love letter of the song ‘Darlin’, The Tigerlilies has every reason to believe there’s creative mileage left in the tank.

“We have a new single coming out, ‘Shipwrecked/Lovers’ due in about six weeks. Furthermore, we have regional shows here in the Midwest, and new songs to record. Also, in the spring, we will re-release our album “Space Age Love Songs.”

(Photography courtesy of The Tigerlilies)

I really like the epic feel of Bowie. It’s a love letter to the man..."

The Tigerlilies recount one anecdote to FLW from their back catalogue of memories.

“The band has played more than a couple of benefits in the last few years.  At two in particular at the Southgate Revival House in Newport, KY, we had strange happenings.  One was a benefit for a departed friend that needed funeral expenses.  As we finished the last song (One-Chord Wonders, Adverts) Brian [Driscoll] jumped up and came down weird on his leg and broke his ankle.  People applauded, then someone said, “Get up!”  Turns out, he was really hurt.  Just this past weekend, at the same place, there was a benefit for local radio station WNKU.  All the bands played as long-gone bands; the Tigerlilies play as T. Rex.  Again, last note, last song (20th Century Boy) as Brian quickly took off his bass and turned around he hit his knee into a Vox Amp expelling the bass into the crowd and he went down in a heap!  Rock and roll is indeed hazardous to your health!”