Yes folks, it’s here on the eve of the Rockabilly Rave an interview with Jerry Chatabox. This year’s line-up is really rather special and Famous Last Words Records (FLW) has been granted access to provide press coverage at this year’s event. Please head to our One Cup of Coffee section to read a fascinating insight of the life and times of Europe’s most important rockabilly festival, the Rockabilly Rave. In addition, the following short piece is a little extra taken from the interview, but not making the final article, with Jerry Chatabox regarding his thoughts concerning press coverage of the rockabilly genre. 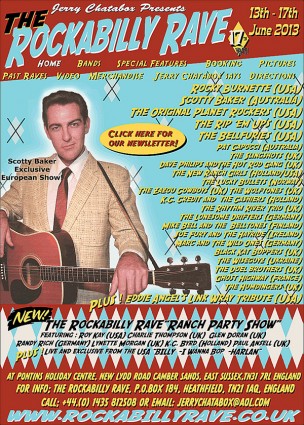 “That’s a difficult question because the rockabilly scene is quite an insular one as far as the press is concerned as over the years it’s received very bad press and most journalists have come into the scene, looked at it and said, ‘There’s a load of Elvis freaks and let’s find the one wearing blue suede shoes and interview him and ask about Elvis Presley’. So over the years, as that’s happened, and the passion for these unsung heroes has been greatly ignored, I think the whole scene has pretty much ignored the press and the press coverage as well. Recently bands have broken through, with various versions of rockabilly with Imelda May as a good example and Darrel Higham, her husband and guitarist and who was a rockabilly guitarist for twenty years plugging away at little gigs, who clearly sees the irony of Imelda May now being hailed as a new rockabilly icon after performing at pubs and clubs all of his life! We all enjoy that on the scene when there is press coverage and a possible knock-on effect where people discover our scene through that, but we don’t expect anything from the press other than being treated like weirdos as we totally get that we’re outside of the mainstream and will probably always remain that way as that’s generally accepted and comes with the territory.”